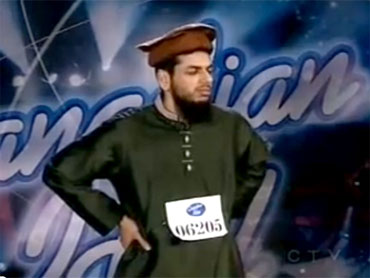 A man who appeared on Canada's version of "American Idol" was the third person arrested as part of an alleged plot against targets in Canada and abroad, police said Thursday.

The two other suspects made a brief appearance in court on Thursday on charges they had plans to make bombs and had plans to use them.

Police arrested Hiva Alizadeh and Misbahuddin Ahmed in Ottawa on Wednesday and Khurram Syed Sher in London, Ontario on Thursday. Alizadeh, 30, and Ahmed, 26, appeared in court Thursday. All three are Canadian.

Sher, 28, appeared on the reality show "Canadian Idol" in 2008 in which he sings a comical version of Avril Lavigne's "Complicated," complete with dance moves that include a moonwalk. He told the judges he's from Pakistan and likes hockey, music and acting.

Police allege the men had plans and schematics to make improvised explosive devices. Police seized 50 electronic circuit boards which they say could be used as remote-control triggers for bombs. They said one of the men was trained overseas to make explosive booby traps, but did not specify which one.

Police say they moved in on the men to prevent them from sending money to terror groups in Afghanistan.

"The arrests have prevented the gathering of bombs and the execution of one or many terrorist attacks," RCMP Chief Supt. Serge Therriault said.

Therriault said details on the targets would be released in court. Police allege they conspired with an additional three named individuals to "knowingly facilitate terrorist activities" in Canada and abroad. Police say the plot ranged from Canada to Iran, Afghanistan, Dubai and Pakistan, but did not elaborate.

Canadian Prime Minister Stephen Harper said the arrests should remind Canadians that they are not immune to terrorism.

"The networks that threaten us are worldwide. They exist not only in remote countries but they have - through globalization and through the Internet - they have links through our country and all through the world," Harper said.

A judge remanded Alizadeh and Ahmed in custody until they appear again, by video, next Wednesday.

Police said Sher is a doctor in St. Thomas, Ontario, and that Ahmed is an X-ray technician in Ottawa.

Ahmed's lawyer, Ian Carter, said the charges are serious and his client, a husband and father, could be put away "for a long time."

Police descended on a home in Canada's national capital of Ottawa early Wednesday.

The arrests come four years after the apprehension of the so-called Toronto 18, suspects in a homegrown terror plot that involved the attempted setting off of truck bombs in front of Canada's main stock exchange and two government buildings. The ringleaders and others have been convicted.