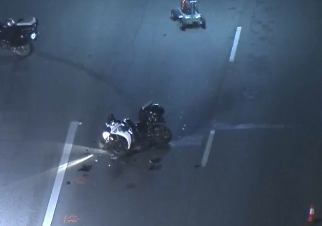 LOS ANGELES -- A crash involving motorcycle officers accompanying Canadian Prime Minister Justin Trudeau on his visit to Southern California sent one officer to the hospital. Trudeau's vehicle was not involved and he was not hurt.

One officer was hospitalized with moderate injuries. It's not clear what caused the crash.

Video showed a motorcycle down on a road, and some roads where the crash took place were shut down, CBS SF Bay Area reports.

Trudeau was on his second day of a visit to California. He made appearances in San Francisco on Thursday and is set to appear in Los Angeles on Saturday.

Trudeau came to the U.S. with an unambiguous message: the North American Free Trade Agreement is a success that needs to be modernized, not abandoned. With the next round of talks over the trade pact set to begin in Mexico later this month, Trudeau used his speech at the Ronald Reagan Presidential Library to cast the deal as part of a long history between the two countries that has been beneficial for both.

He also echoed frequent criticism from President Donald Trump, who has threatened to pull out of NAFTA, that too many workers are being left behind in the global economy.

The speech was a centerpiece on his swing in which he warned Canada won't be muscled into a trade deal that is unfavorable to his country. He promoted Canada as a destination for California technology firms uneasy with shifting U.S. immigration policy.