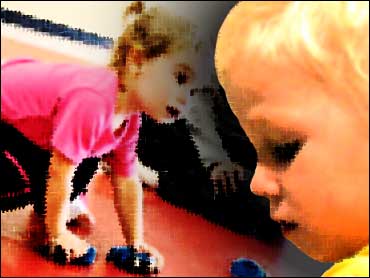 The labels on two prescription creams to treat eczema, a skin ailment that commonly affects children, will have to bear "black box" warnings of possible cancer risks.

The new labeling also will clarify that the two drugs are recommended for use only after other prescription topical medicines have been tried by patients, the FDA said. The agency is also issuing a guide updating patients about its concerns.

A black box warning is the most serious type of warning in prescription drug labeling. The warning will be located lower on the labels of the two drugs than is typical, although a statement higher on the labels will refer to the risk.

told
co-anchor Hannah Storm Monday that eczema is "really an overreaction of the immune system. At least, that's what it's believed to be. And when kids get it or even adults get it, they develop a rash. It can be a sort of thick, patchy, very itchy rash that is usually found in places like on the arms or the knees."

Senay and Storm both have children who have suffered from eczema.

"It drove my son crazy," Senay says. "It kept him up at night. So, we really looked for ways to treat it.

"There's a lot of common treatments out there that parents try, things like steroid creams, moisturizers, and certain types of things you can put in the bath. But, for kids who really have intractable cases, two new products came on the market and those are the products that are now under scrutiny from the FDA."

Elidel and Protopic are applied to the skin to control eczema by suppressing the immune system.

The two medications, Senay explains, have been on the market a number of years, and have been used by millions of people. "The concern," she points out, "is that there has been a very small number of case reports potentially linking these drugs to certain types of skin cancer. So the FDA is now going to require that these two drugs have black box warnings on them. That's the strongest warning that the FDA gives. And there are also some animal studies that do suggest a potential problem there.

As of October, the FDA has received reports of 78 cases of cancers, including skin and lymphoma, in patients treated with the two drugs, said Dr. Stanka Kukich, the acting director of the FDA's dermatologic and dental drug products division.

Novartis Pharmaceuticals, which makes Elidel, said in a statement Thursday that it remained confident in the safety and efficacy of Elidel.

"While Novartis believes this action is not substantiated by scientific or clinical evidence, Novartis has agreed to make the requested changes," the company said.

Astellas Pharma Inc., formed through the merger of Protopic maker Fujisawa Healthcare Inc. and Yamanouchi Pharmaceutical Co., said in a statement that its drug "is safe and effective when used in a manner consistent with its label."

"It addresses a theoretical risk — a potential risk, not a demonstrated link," Dr. Joyce Rico, vice president for medical sciences research and development at Astellas, said of the warning.

While the two manufacturers dispute whether there is a cancer link, the FDA felt it had to convey notice of the cancer reports to doctors and patients, said Dr. Julie G. Beitz, an acting director of one of the FDA's drug evaluation offices.

The long-term safety of the drugs has not been established, according to the FDA. While both companies are studying that issue, the results may not be known for years, the FDA said.

Senay notes that Elidel and Protopic "should be prescribed for people who really have no other options, who have gone through the more commonly used drugs like moisturizers or steroid creams or oral steroids and really are not getting relief. They should be used for a short period of time, not an extended period of time. If they need to be used for longer, they need to be used intermittently.

"There is some suggestion that there is a dose response relation between the amount you use. People should use as little as possible. These are not appropriate for kids under the age of 2."

You can kind of minimize eczema, Senay says, "if you can figure out what the triggers are. You can use moisturizers ahead of time, so kids don't scratch or itch. When my kid scratched, it seemed to make it worse. Sudden changes in temperature and humidity. Very dry air seemed to bring it on. Avoid sweating or over-sweating.

"In some kids, stress can bring it (eczema) on. Scratchy materials. Harsh soaps and detergents. For kids that have real allergies, sometimes it's a food or allergen in the environment that will bring on a whole allergic response. Anything that you can figure out as a parent that might provoke it, try to avoid it."