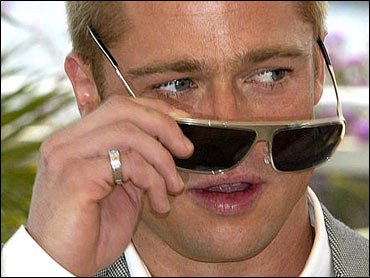 Brad Pitt stormed Troy. Then he marched on Cannes.

"Troy," in which he plays Greek warrior Achilles, was the spectacle of the day at the Cannes Film Festival, where the movie screened Thursday amid its rollout to theaters this week.

Directed by Wolfgang Petersen ("The Perfect Storm," "Das Boot"), "Troy" is a new take on Homer's "The Iliad," which recounts the city's siege by a Greek army that sailed to retrieve Helen, queen of Sparta, who fled with her lover, Paris.

While rooted in ancient mythology, the story of a Western power waging war against an Eastern enemy remains relevant with the U.S.-led occupation of Iraq, Pitt and his co-stars said at a Cannes news conference.

"There's no way around it. The themes Homer seemed to be getting at resonate today," Pitt said. He said the element he appreciates most in "The Iliad" is "this greater idea of a common humanity, and how do we get past these hatreds and resentments that build up between us?"

Pitt's Achilles is a vainglorious man who fights for his own renown and ponders whether his name might live on for centuries. The actor conceded that in today's celebrity culture, his own fame would vanish much more quickly.

One of Pitt's acting idols of the 1960s, Julie Christie, signed on to play Achilles' mother, which failed to impress some of his younger co-stars.

"They asked me who Julie Christie is," Pitt said. "I think the point is it's all going down, it all fades, so enjoy it while you can."

With 4,000 reporters on hand, Cannes has become a prime zone for studios to showcase movies about to hit theaters, giving the flicks a final surge of publicity. "Troy" opened Wednesday and Thursday in some European markets. By Friday, when it debuts in the United States, the film will be playing in dozens of countries.

German director Petersen notes "Troy" was inspired by "The Iliad" but that the filmmakers took liberties to hold the movie to a manageable two hours, 40 minutes, and make it credible to today's audiences.

The film drops the Greek gods as active meddlers in the actions of humanity, which moviegoers likely would have found laughable, Petersen said.

"We decided to go with human beings as they are," Petersen said. "They make the decisions."

Some events in the 10-year siege of Troy, which culminates with the Trojan horse concealing Greek troops who begin sacking the city, seem condensed. "Troy" also presents a harsh fate for power-hungry Agamemnon different from his tragic homecoming in Greek mythology.

Hollywood cynics have carped about casting blond pretty boy Pitt as the brooding, savage Achilles. Pitt spent six months muscling up his already firm frame, and the movie shows off his washboard abs at every opportunity.

Bloom, the heartthrob who played heroic elf Legolas in "The Lord of the Rings" trilogy and a gallant swashbuckler in "Pirates of the Caribbean: The Curse of the Black Pearl," also had to play against type. His Paris suffers the humiliation of a cowardly retreat in battle while his love watches from the walls of Troy.

"Paris is a young man placed among a backdrop of great warriors," Bloom said. "And he's really not that. He's a lover."

Pitt, who is married to Greek-American actress Jennifer Aniston, sidestepped a question about what life is like with a Greek woman.

"Do you want me to say Greek women are better than all others? Very dangerous. Good at home, bad out here," Pitt said. "I will tell you this. My wife liked the costume. She asked me to bring it home."