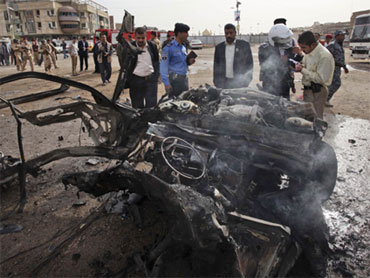 A car bomb exploded near a bus for pilgrims in the Shiite holy city of Najaf on Saturday, killing at least three people, including two Iranians, officials said, on the eve of key national elections.

A group of Iranian and Iraqi pilgrims were waiting to board the bus after visiting a famous shrine 100 miles south of Baghdad when the bomb exploded about 100 yards away, a witness said.

There were scenes of destruction at the site of the blast, and the still-smoldering wreckage of the car bomb lay near the burnt-out remains of the bus, while buildings nearby were damaged.

The governor of Najaf, who inspected the scene on Saturday, said the blast would not "thwart our determination to go to polling stations."

Injured people from the blast were taken to al-Hakeem hospital for treatment. Among the injured were two Iranian pilgrims.

Police blocked access to the blast site and prevented all but the wounded from entering the hospital, fearing more attacks.

The blast comes a day before Iraqis vote in key parliamentary elections. More than 6,000 candidates are competing for 325 seats in the Iraqi parliament, says CBS News correspondent Elizabeth Palmer. By law, 25% of them have to be women.

For months Iraqi voters have been deluged with campaign ads on TV, and the country is festooned with election posters.

Blasts in other Iraqi cities have killed dozens this week, underscoring warnings that insurgents would attempt to disrupt the vote with violence.

U.S. and Iraqi officials have warned that insurgents could attempt to disrupt the vote with violence. An al Qaeda front group issued a statement on Friday telling people not to leave their homes on Election Day.

Although security in Iraq has improved hugely since the terrible violence of 2005 and 2006, Iraqi politics is still a rough trade.

Voters know there are allegations of extremely dirty tricks in the run-up to this election, including sectarian assassinations.

But, says America's ambassador in Iraq, overall the system is working.

"What kind of democracy this is, I think time will tell, but certainly I think they have embraced the concept," said Ambassador Christopher Hill.

That means millions of Iraqis heading to the polls tomorrow will be voting on issues like corruption, jobs and decent education for their children.

Voting begins tomorrow at 8 o'clock, on foot. For extra security there is a complete ban on any car traffic countrywide.