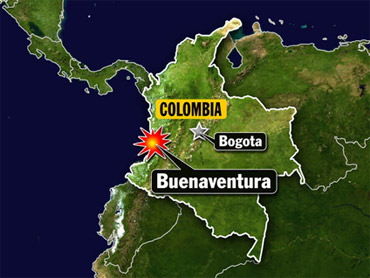 A car bomb exploded in the administrative centre of Colombia's Pacific port of Buenaventura on Wednesday, killing six people and wounding more than 30, authorities said.

Buenaventura is a key cocaine trafficking centre that is rife with rival criminal bands from the right and left.

"It seems it was a car that was abandoned during the night and there are six dead, 32 injured, some of them with minor injuries," said Valle del Cauca provincial Gov. Juan Carlos Abadia.

Outgoing President Alvaro Uribe has put the rebels of the Revolutionary Armed Forces of Colombia on the defensive since taking office in 2002.

But the group known as the FARC remains capable of damaging attacks and in recent months it has stepped up raids on military posts in Valle del Cauca in particular. Authorities say it is involved in the cocaine and marijuana trade in the region.

Gov. Abadia said that the area also has suffered violence from drug traffickers and right-wing paramilitaries.

Wednesday's car-bombing was the most serious in Colombia since a September 2008 blast killed four people in front of the palace of justice in Cali, capital of Valle de Cauca province.