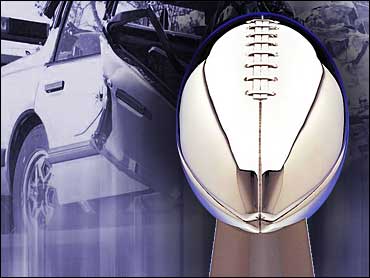 Automobile crashes climb more than 40 percent in the hours after the Super Bowl, with the surge highest in the losing team's territory, perhaps because heartbroken fans are obsessing over the defeat and not concentrating on their driving, researchers say.

In the first study to quantify the problem, researchers at the University of Toronto in Canada examined U.S. accident data from the last 27 Super Bowls.

They found both fatal and nonfatal crashes increase after the football game, causing an average of seven additional deaths and 600 extra injuries.

The researchers theorized that drinking during the game, driver fatigue because of the late hour, and distraction and disappointment among drivers whose team lost all contribute to the rise in accidents.

"We think that it may be alcohol and fatigue and inattention, and in particular the sort of what-if conjectures and Monday morning quarterbacking that occurs" after one's team loses, said Dr. Donald A. Redelmeier, a professor of medicine who also works at Canada's largest trauma center.

The study was reported Thursday in the distinguished New England Journal of Medicine.

Redelmeier said he patched up some accident victims on Super Bowl Sundays while finishing his medical training at a California hospital in the 1980s. "After the game was over, things became extremely hectic," recalled Redelmeier, who focuses his research on traffic safety.

So Redelmeier and one of his graduate students, football fan Craig Stewart, reviewed accident data from the U.S. National Highway Traffic Safety Administration from 1975 through 2001 for the Sundays when the Super Bowl was played, as well as the previous and subsequent Sundays.

"That 41 percent relative increase is larger than the New Year's Eve increase in the United States," Redelmeier said.

In states with the losing team, the number of crashes increased 68 percent after the telecast ended, while accidents rose only 6 percent in the winner's state. Accidents climbed 46 percent in the "neutral" states.

"It's clear that even the alcohol-negative people here have a reaction to it being the Super Bowl," said Stephanie Faul, spokeswoman for the AAA Foundation for Traffic Safety. "If you're replaying things in your head, you're not paying attention" to driving.

A surge in deaths was seen in 21 of the 27 years studied, and was largest in the first hour after the telecast ended. There was no shift in the rate of accidents before the kickoff, but a slight decrease during the game.

Redelmeier said drivers ought to pay more attention or avoid unnecessary driving on Super Bowl Sundays, and trauma centers ought to bring in extra staff for the big game.

Faul said Super Bowl fans who drink should plan ahead and use a designated driver or take a cab or public transportation.

If your team loses, "instead of saying, `Yuck' and going home, hang out a little bit and talk about it with your buds," she said. "Get it out of your system and sober up" before driving home.