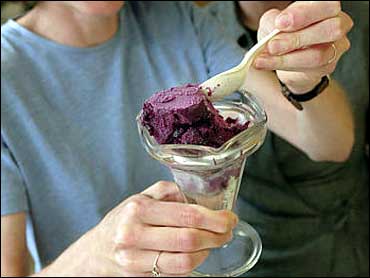 For the past 17 years, Parade magazine has asked Americans about the choices they make when it comes to food and nutrition.

The survey, which will be featured in Sunday's issue, reveals that Americans aren't cutting out carbs completely anymore. In fact, we are learning the difference between good carbs and bad carbs, and eating more fruits, vegetables and whole grains.

"Everyone has to pat themselves on the back," Carpentier says. "What we found is the biggest change in the last year, in terms of Americans' eating habits, wasn't the elimination of carbs. It was (that) they really got the message and (have) been reducing the portions of the food they're eating."

Another study finding: Americans are dieting less (1-in-5 dieting now, as opposed to 1-in-3 a year ago).

"I think," Carpentier surmises, "we've gotten so accustomed to being told that this is the 'can't-fail' diet, and you get onto it and you follow this really strict regimen and what happens? Not to you but the rest. What happens is you lose the weight and then you start to slide back and the good news is that people have finally learned and the rest of us are learning that if you want to look good and maintain a healthy weight, you have to make permanent changes to the way you eat."

Those who are dieting want to lose an average of 38 pounds. And 1 in 5 of us wants to lose at least 50 pounds.

More from the survey: Some 52.7 percent of Americans are choosing only healthy snacks or healthier alternatives to their favorite snacks. Parents are most concerned about too much sugar in their kids' diets, followed by too much fat and not enough calcium.

You can learn more about "What America Eats" in this Sunday's issue of Parade, found in newspapers nationwide.