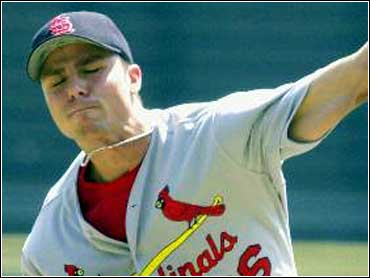 With two strikes in the count and two outs on the scoreboard, Will Clark was determined to battle Curtis Leskanic.

He won the battle with the bat on his shoulder.

Clark drew a two-out, bases-loaded walk from Leskanic in the 12th inning as the St. Louis Cardinals beat the Milwaukee Brewers 2-1 Saturday.

The NL Central-leading Cardinals have scored more than four runs in a game just twice during a 5-6 August, but Clark's patience secured a tough victory. St. Louis kept the surging Cincinnati Reds 4 1/2 games back in the division race.

"When you get two strikes, you're in there having a major, major battle," said Clark, who went 1-for-5 but is hitting .389 since arriving from Baltimore at the trade deadline. "I just said I wasn't going down without a fight. We've been letting too many opportunities like that slip away."

He then struck out Craig Paquette and Jim Edmonds before getting a 2-2 count on Clark, who took a third ball and fouled off two inside fastballs. Leskanic's close full-count pitch was called a ball by umpire Phil Cuzzi, who angered both teams with his balls-and-strikes calls.

"There were some close ones, and the umpire ufortunately thought it was a ball," said Leskanic, the Brewers' closer. "What am I supposed to do? I've got to take it like a man and come out tomorrow and try to get another save."

"The pitch was up and in," Cardinals manager Tony La Russa said. "It was a ball, but it's not an easy pitch to lay off."

Matt Morris (1-3) threw a scoreless 11th inning to get the victory, his first since Sept. 22, 1998. Morris missed all of last season after surgery to replace a ligament in his elbow.

Mike James pitched a perfect 12th for his second save.

"In something like this, it's hard to get it going, to get that spark," La Russa said. "We persevered on offense, and there were some heroes in the bullpen today."

Milwaukee starter Jimmy Haynes and four relievers retired 16 of 17 Cardinals hitters, including 12 straight. The Brewers didn't allow a hit after the sixth inning until Polanco's single in the 12th off Leskanic.

"A base hit at the right time in several situations, and we wouldn't have had to go into extra innings," Milwaukee manager Davey Lopes said. "We've pitched extremely well, but we've struggled offensively all year."

Rick Ankiel, who has won just once in his last nine starts, dominated the Brewers for the game's first five innings. He retired 14 of the first 16 hitters he faced and struck out six, but a bout of wildness in the sixth allowed Milwaukee to tie the game at 1.

Ankiel walked four batters in the sixth, and Richie Sexson's double brought home Ron Belliard with the Brewers' only run. The damage could have been worse, but Geoff Jenkins hit into a double play and Luis Lopez grounded out with the bases loaded.

Haynes wasn't as smooth as Ankiel, but he also kept the Cardinals off the scoreboard until the sixth, when Hernandez's two-out single scored Clark with the game's first run. Haynes allowed eight hits and two walks over seven innings.