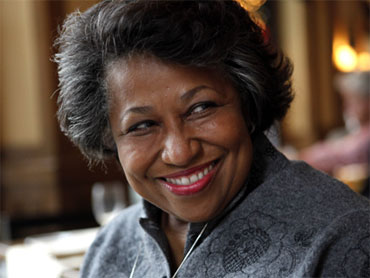 Braun, who runs an organic food company, formally declared her bid to replace retiring Mayor Richard Daley at an event at a lakefront airport Daley shut down to turn in to a nature preserve. Daley surprised the political establishment by announcing in September that he wouldn't seek a seventh term.

The 63-year-old Braun made history when she was elected in 1992 as the first black woman in the U.S. Senate. She lost her re-election bid in 1998 and was later named ambassador to New Zealand. Braun ran unsuccessfully for the Democratic nomination for president in 2004.

Braun is counting on her wide breadth of government experience to resonate with voters, but some of them weren't even born when she won her last election in 1992 for the U.S. Senate. Before that, she served as an Illinois state lawmaker and Cook County government official.

She will likely have to address some past miscues that raised questions about her judgment, including a highly criticized visit with a brutal Nigerian dictator when she was a senator and never-proven accusations about misused campaign money.

Absent from the political scene for six years and having previously referred to herself as a "recovering politician," Braun has to reintroduce herself to voters in the mayor's race.

"My job is talking about and describing a vision for the future. A vision of what we're going to do now. Like I said, Chicagoans are very practical people. They're a lot more interested in what is going to happen than what happened last week," she said during an Associated Press interview earlier this week.

Braun said her business experience running a small company that specializes in coffee, tea and spices should be a plus with voters because she has had to work hard to weather the recession that has battered businesses, both big and small.