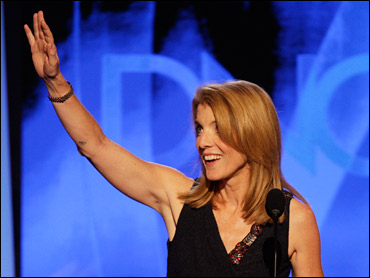 Caroline Kennedy has spoken to New York Gov. David Paterson about the Senate seat that will come open when Hillary Rodham Clinton becomes secretary of state, according to a person familiar with the conversation.

Kennedy reached out to the governor to discuss the Senate seat, according to the Democratic source, who spoke on condition of anonymity because the conversation was private. The source would not disclose the details of the conversation.

Kennedy is the daughter of President John F. Kennedy and a niece of brothers Edward and Robert. Robert Kennedy held the New York seat from 1965 until his assassination in 1968.

As a prominent member of the Kennedy clan, Caroline Kennedy Schlossberg is the kind of high-profile, historic figure who could overshadow many other New York politicians hoping to be Paterson's choice.

The governor has said he is in no rush to make a decision, and Clinton is not giving up the seat before she is confirmed as President-elect Barack Obama's secretary of state.

"The governor has not yet reached out to any potential candidates," said Paterson's spokesman, Errol Cockfield. "He has been approached by several candidates. Any discussions related to that selection are private and the governor will not comment about speculation before a decision is made."

Word of the conversation comes days after Kennedy's cousin, Robert F. Kennedy Jr., announced he was not interested in the job - a move that sidesteps any messy intra-family competition.

Whoever Paterson appoints would serve for two years and then have to run in a special election in 2010 to serve out the remainder of Clinton's six-year term, which ends in 2012.

Paterson has said he will run in 2010 for his first full term as governor. New York's senior senator, Charles Schumer is up for reelection in 2010 as well.

Kennedy has strong connections to incoming Obama administration officials - though Obama transition spokeswoman Stephanie Cutter insisted they were not involved in any way with the search for the next U.S. senator from New York.

As a prominent booster of Barack Obama's presidential bid, Kennedy spent much of 2008 taking bigger steps onto the public stage.

As famous as she is, she always has been viewed as almost painfully shy. She does not like talking about herself, nor does she appreciate those who do.

She met her husband, Edwin Schlossberg, while working at the Metropolitan Museum of Art. They married in 1986 and have three children.

She made a splash in early 2008 by writing an op-ed column for The New York Times declaring her support for Obama, saying he had the potential to be as inspirational to Americans as her father was in the 1960s. She also spoke at the Democratic National Convention.

She then hit the campaign trail with Obama, and worked on the vice-presidential search that eventually settled on Joe Biden.

Caroline Kennedy is easily the most famous contender for Clinton's Senate seat, but there are plenty of others. New York Attorney General Andrew Cuomo is widely known in the state. Paterson could also pick Buffalo Mayor Byron Brown or Tom Suozzi, a Long Island elected official.

There are also a number of House members in the running, including Reps. Carolyn Maloney, Kirsten Gillibrand, Steve Israel, Brian Higgins, Nydia Velazquez and Jerrold Nadler.