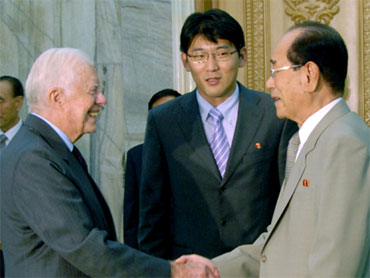 On Day 2 of Jimmy Carter's journey to North Korea, there was no sign Thursday that the former American president had succeeded in securing the release of a Boston man jailed in the country since January.

Carter was making a private humanitarian visit to negotiate the release of Aijalon Gomes, sentenced to eight years of hard labor in a North Korean prison and fined some $700,000 for entering the country illegally from China, U.S. officials said.

There was no indication Thursday that Gomes was free. Carter, originally slated to depart Thursday, according to U.S. officials, appeared to have extended his trip by at least a day, South Korea's YTN television reported in Seoul.

North Korean leader Kim Jong Il, meanwhile, turned up in China - a surprise trip for a man who rarely travels abroad and was anticipated to hold a high-profile photo op with the former U.S. president.

Neither China nor North Korea announced the trip; Kim's travels typically are not publicized by North Korea until after his return.

However, teachers in Jilin province in northeastern China, a region with patriotic significance for North Koreans, told The Associated Press that Kim paid a 20-minute visit to their school Thursday morning. Kim's father, late President Kim Il Sung, attended the school from 1927-30.

It was unclear whether Kim Jong Il would return to Pyongyang, about 300 miles from Jilin City, in time to meet with Carter. Carter is well-regarded in North Korea despite the two countries' longtime animosity; he met with Kim's father on his last trip to Pyongyang in 1994 - a warm meeting that led to a landmark nuclear disarmament deal.

"It would be good for Kim to meet with Carter, but Kim's priority is to resolve food shortages," said Cheong Seong-chang, a senior analyst at the Sejong Institute think tank outside Seoul. "Carter is on the back burner."

North Korea also is preparing to hold a rare political convention in early September, and there was speculation that Kim was seeking Chinese approval for the heir he is widely believed to be grooming to succeed him as leader.

U.S. officials have stressed that Carter's trip is an unofficial, private visit. However, such visits, including the journey by ex-President Bill Clinton a year ago to secure the release of two American journalists, have offered the chance for unofficial diplomacy between the U.S. and North Korea.

North Korea and the U.S. fought on opposite sides of the Korean War. Three years of warfare ended in 1953 with a cease-fire but not a peace treaty, and the two Koreas remain divided by one of the world's most fiercely fortified borders.

To this day, the U.S. stations 28,500 troops in South Korea to guard its longtime ally, a presence that chafes at North Korea, which cites the forces as a main reason behind its need for nuclear weapons.

For more than a year, relations have been particularly tense, with North Korea testing a nuclear weapon and long-range missile technology, and the U.S. leading the charge to punish the North for its defiance of U.N. sanctions.

The March sinking of a South Korean warship, which killed 46 sailors, has provided fresh fodder for tensions. Seoul and Washington accuse North Korea of torpedoing the vessel, while the North denies involvement and has threatened harsh retaliation if punished.

With all sides digging in, six-nation talks on North Korea's nuclear disarmament have remained stalled. Last year, it took Clinton's visit to get the U.S. and North Korea talking again. Carter's mission to bring Gomes home was expected to provide another face-saving opening for contact.

North Korea agreed to release Gomes to Carter if the ex-president paid Pyongyang a visit, one U.S. official told AP earlier in the week, speaking on condition of anonymity because of the sensitivity of the situation.

U.S. State Department spokesman Mark Toner told reporters in Washington that he could not give details of Carter's trip. "We don't want to jeopardize the prospects for Mr. Gomes to be returned home by discussing any of the details," he said Wednesday.

Gomes, who taught English in South Korea, was described by acquaintances as a devout Christian who may have followed an American friend, Robert Park, into North Korea. Park has said he entered the country deliberately last Christmas to call attention to its human rights record. He was expelled about 40 days later.

Last month, the North's Korean Central News Agency said Gomes, 31, attempted suicide, "driven by his strong guilty conscience, disappointment and despair at the U.S. government that has not taken any measure for his freedom."

U.S. officials have pressed for his release on humanitarian grounds, but the State Department said officials who made a quiet trip to North Korea earlier this month failed to secure his freedom.