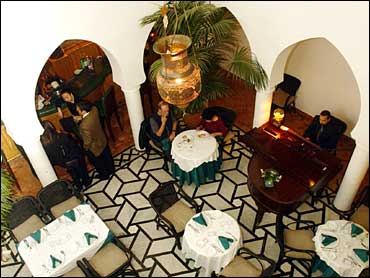 There's a new gin joint in town, and now everybody comes to Rick's.

In homage to the 1942 movie "Casablanca," a former U.S. diplomat spent two years of work and a million dollars in investments to bring Rick's Cafe to Morocco's largest city.

The elegant nightclub where Humphrey Bogart pined for Ingrid Bergman was just a set on a Warner Bros. sound stage in California the film crew never got anywhere near North Africa.

The new Rick's has the same warm atmosphere as the Hollywood original. It's a white villa near the port, with palm trees flanking the door. Inside, there are arched passageways and traditional hanging lamps of colored glass.

But you won't find Sam at the keyboard, because these days, the pianist's called Issam. And there's not a single photo of Bogart on the walls.

"Rick's Cafe is no longer just a film, it's not a museum, it's a reality," said founder Kathy Kriger, sipping a glass of Moroccan cabernet. Nearby, waiters in traditional fez caps and wide-legged pants serve customers at candlelit tables.

The elegant restaurant debuted in March, and it's open for lunch and dinner seven days a week. A typical meal costs around US$30. Pianist Issam Chabaa, a native of the capital city of Rabat, plays standards from the '40s and '50s. On Sunday nights, Kriger serves popcorn and chili con carne and screens Casablanca.

Kriger, 57, says she watched the classic film hundreds of times to study the atmosphere, lighting and lines.

"I'm surprised my tape didn't wear out," she said.

Kriger left her job as a commercial attache at the U.S. consulate in Casablanca when she was supposed to transfer to Tokyo in 2002. She'd become too attached to her new home.

She scouted for locations and decided to open in Casablanca's medina, a bustling labyrinth of narrow streets and shops. It took months to get the various authorizations, including a liquor license — no small task in this mostly Muslim nation.

Kriger hoped to bring a bit of the American dream to the North African kingdom, which stretches from the Mediterranean to the Sahara. And she hoped to be a voice of American-Moroccan dialogue.

"After Sept. 11, I realized that maybe certain authentic American values were no longer understood in the Muslim world," Kriger said. "I wanted to show how Americans can be: open, determined and persevering."

Many Moroccans have become deeply resentful of U.S. policies, especially after the Iraq war.

The Moroccan government, however, is one of the Muslim world's closest U.S. allies, and the United States has routinely praised Morocco for its democratic changes under King Mohammed VI, who took the throne after the death of his father, King Hassan II, in 1999.

It's also a strong ally on the war on terror and is battling its own extremist movement at home. Last May, suicide bombings in Casablanca killed 33 bystanders and a dozen bombers. Most of the suspects charged in the March 11 train bombings that killed 191 people in Madrid were Moroccans.

Kriger, a native of Portland, Oregon, says she hopes to show a positive image of Americans by doing business in Morocco. And she hopes that Rick's will prove Morocco is ripe for investment and open to a woman entrepreneur.

"Because there has never been a Rick's Cafe here, I could be reasonably assured that it would succeed," she said.

"It was already an institution, and it never even existed. It's not often you get a chance to turn myth into reality."