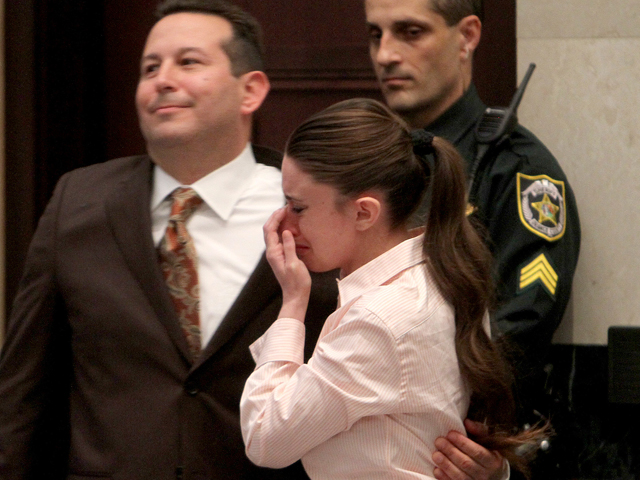 (CBS) In his new book, "Presumed Guilty - Casey Anthony: The Inside Story," defense attorney Jose Baez comes out swinging. He calls the media a "monster," the police "careless," and the prosecution "scheming, ruthless."

"This was not real life," writes Baez, "it was the media's Casey Anthony reality show, a show that depended on name-calling and controversy for television ratings."

What began with a phone call about representing a young woman accused of lying to law enforcement and child neglect turned into a three-year child-murder case that made international headlines and turned him into the lead advocate for "the most hated woman in the world."

In "Presumed Guilty," Baez makes a compelling case for Anthony's innocence, revealing bits of evidence not introduced at trial - including rips in the shorts Caylee was buried in, and phone records that he says correspond with Casey's version of what happened the day Caylee died.

On the eve of the anniversary of Anthony's acquittal, Crimesider spoke with Baez about preparing for the trial, confronting Casey Anthony's father with allegations of incest, and why he believed Casey when she told him Caylee drowned in the family pool.

Crimesider: Why did you write this book?

Jose Baez: I always thought the verdict would have at least drawn people to ask, "Why did the jury reach this verdict?" as opposed to criticizing that the jury reached this verdict. Part of my dedication to the book is to the jury who made the sacrifices that no one else made in this case.

Crimesider: What kind of pressure did you feel as you prepared for this case?

Baez: My client hadn't had hadn't her day in court and what was happening right away was this vilification of her. The biggest pressure I had was trying to minimize that or deflect it. As it turns out there was really was nothing I could do about it.

Crimesider: What did you think about the anger people felt toward Casey?

Baez: I was kind of shocked by it because, as a defense lawyer, you see far worse. You know, there are crime scenes where you see two, three people deceased. I was kind of thrown back by it a little bit, like, why is this case getting people so much angrier than the others?

Crimesider: Was it something about Casey herself?

Baez: I think Casey Anthony's story, the whole case, was a media phenomenon. And I say that because she was young, pretty and white. If it didn't have those elements to it I don't think it would have taken off.

Crimesider: Before going to trial, what were your fears?

Baez: I was afraid that this trial would be decided on emotions, and not the evidence.

Crimesider: In the book, you write about the day you confronted George Anthony and accused him of sexually abusing Casey. What was his reaction?

Baez: When we sat him down and we talked to him he didn't deny it. He just sat there and wanted to know what more she had to say.

Crimesider: You mention in the book that you were surprised and saddened to learn that Casey basically had no friends or supporters. Why do you think she didn't have people who she was close to and who came to her side?

Baez: There's a clear indication that she had issues with building relationships and that those are a recognized symptom of sexual abuse. Trust issues, is what I should say. And in order to build relationships you need to build trust. If you can't trust people, then your relationships are pretty much superficial.

Crimesider: You also write that it seemed as though Casey actually enjoyed being in jail. Why do you think that was?

Baez: I think it was a safe place where she had structure, you know. If you look at some of the computer searches [on Casey's home computer], everybody made a big deal of the "neck-breaking" searches. Well, the neck-breaking came from a self defense kung-fu website. And the searches prior to that were using household items as weapons - self defense for women. What does that tell you? It told me that somebody doesn't feel safe in their home.

Crimesider: One of the things everyone talked about was the fact that Casey lied a lot. In fact, the only  thing she was convicted of in this case was lying to police. Did you worry that she was lying to you? Did you catch her lying to you?

Baez: Whatever she told me I had to corroborate it. The position that we were in when she had been caught in all of the lies was that no one would believe her. It was like the boy who cried wolf.

Crimesider: When she first told you that Caylee had died by drowning in the family's backyard pool - the scenario you raised as the truth about Caylee's death - did you believe her?

Baez: When I initially heard it I thought it made sense, but I wasn't so ready jump onboard. When you do this long enough you start to take a less emotional and more objective approach. And my objective approach was okay, I'm going go back and look at every single piece - every document in this case and every single piece of evidence and I'm going try and disprove what she said. And I couldn't do it. In fact, to the contrary, I started finding things that I missed that actually helped prove it.

Crimesider: What kind of things?

Baez: [Casey's mother] Cindy's testimony that the day Caylee died, she comes home and finds the ladder [to the pool] up - not a week, not a month later, not a couple weeks before, but the actual day of June 16th. Something so out of the ordinary occurred that day that she remembers - so much so that the very next day she went to work and told people about it.

Crimesider: In the book you go over a couple pieces of evidence not revealed at trial that bolster your theory that Caylee died in the family's pool while both Casey and her father were home, and that her father buried the little girl. What do you think is the most important thing people should know that you didn't get to put out there during the case?

Baez: I think there were several pieces. One is the phone records that showed that she hadn't left the area of the home until 4:16 p.m. [on June 16, 2008 - the last day anyone saw Caylee alive, and the day Baez believes the little girl drowned in the pool] and that she headed directly towards Tony Lazzaro's house, contrary to her leaving at 12:50 [as her father had said she did] and then going somewhere else.

And Dr. Henry Lee [a forensic scientist] found actual rips on [Caylee's] clothing that showed that perhaps these shorts didn't fit her. The testimony that we were able to get out of trial was that she hadn't worn those shorts in almost a year because she had outgrown them. And so whoever put those clothes on her was not familiar with dressing her. As a mother you know what fits your child and what doesn't fit your child.

Crimesider: Watching the trial unfold in the media, two pieces of evidence I remember being trumpeted as damning were the duct tape found on Caylee's skull, and the smell in Casey's car trunk. You write in the book, that there was never any physical evidence that Casey touched that tape, nor was there evidence of human decomposition in the trunk.

Baez: Correct. There was never any evidence whatsoever. And that's why the jury voted the way they did. They required evidence, not speculation and not guesswork. They wanted evidence - and [the prosecution] just didn't deliver it.