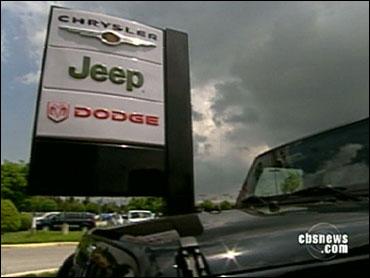 (CBS)
Before the U.S. Senate votes to extend the "cash for clunkers" program, let's examine this question, which seems like a reasonable one to ask: What has it done to reduce carbon emissions?

This was, after all, one of the primary justifications that the Obama administration offered for the program. "This gives consumers a break, reduces dangerous carbon pollution and our dependence on foreign oil, and strengthens the American auto industry," President Obama said last month.

Other Democrats have touted the idea as a way to reduce CO2 emissions. Rep. John Dingell of Michigan predicted in June that the legislation "will result in meaningful reductions in vehicle fleet carbon emissions and fuel consumption." And to Rep. John Olver from Massachusetts, cash-for-clunkers will "pave the way toward a lower-carbon future." Time magazine already is calling the program a "green success."

That argument has a visceral appeal: Let's take the cash for our old cars and trucks, get new ones with Bluetooth and iPod connections, and help out the environment in the process. But a closer look at the existing $1 billion cash-for-clunkers program shows that the rhetoric of Washington politicians doesn't match reality.

Some simple calculations suggest that the existing program will save only about 365,000 metric tons of CO2 a year. Compare that to 29,028,000,000 tons of CO2 emitted worldwide every year, according to U.S. government estimates.

Put another way, if the world's output represented the driving distance from San Francisco to New York, car-for-clunkers' share of CO2 emissions is the distance from CBSNews.com's downtown San Francisco bureau to the nearest subway station. Which is only a few blocks away.

(I'm aware an alternate EPA method takes into effect methane and nitrous oxide emissions, but the CO2-specific EPA numbers tell us that one gallon of gasoline produces 19.4 lbs of CO2. This is also the calculation that Carbonfund.org uses in estimating vehicle CO2 output. ClimateProgress.org guesses there will be a 9 MPG gain and comes up with a 660,000 metric ton reduction in CO2 per year. If my estimate is significantly off, I welcome corrections from Alert CBSNews.com Readers.)

There are other reasons to be skeptical about cash-for-clunkers. Jeremy Anwyl, the chief executive of Edmunds.com, wrote in an opinion article for the Wall Street Journal this week that "it's not clear that cash for clunkers actually increased sales" -- Americans seem to have delayed pre-planned summer car purchases and accelerated pre-planned autumn purchases. Also, Anwyl notes, rising prices for fuel-efficient cars (because of higher demand) will steer other buyers (who aren't participating in the clunkers program) toward less-efficient models.

Second, swapping newer cars for older ones may cause more driving; fuel-efficient cars are cheaper per mile, and a new car is more fun than a clunker. This is what the House of Representatives was told in January by a pro-stimulus economist: "Old vehicles aren't driven as much as new vehicles, so total vehicle-miles-traveled increases as a result of the program." And it also jibes with experience and common sense: as fuel efficiency has increased since the early 1980s, cars get driven more. Plus, there's the environmental cost of building the new vehicles in the first place.

Consider an overseas example. Last month I drove across Cambodia, home to Angkor Wat and the Miss Landmine beauty pageant, in a car exported from America. But it wasn't a GM or Chrysler: it was a used Toyota Corolla with about 185,000 miles.

This might sound odd, but it makes economic sense. Cambodia is a poor country, behind even the sad cases of Nigeria and Sudan in per-capita income. Three-quarters of the Khmer people, which is what they call themselves, work in agriculture -- and the average rice farmer in Cambodia is lucky to make $1,000 a year.

Cambodians tend to ride scooters (even during monsoon season), and you'll also spot elephants, water buffalo, and cattle hauling cargo. They're kind of the short-haul equivalent of a tractor trailer. If someone in Phnom Penh aspires to an actual car, a new one is likely far too expensive, but a reliable used Corolla from the U.S. with 185,000 miles might be within reach.

Sadly, the cash-for-clunkers program requires that vehicles traded in have their engines destroyed. This will raise the costs of used vehicles for poorer Americans. It will also raise the cost of used U.S. vehicles around the world: Cambodians are less likely to upgrade to newer, safer, less polluting, and more fuel-efficient used Corollas.

Perhaps the need to bail out a struggling U.S. automobile industry is enough to justify renewing the program, even though four out of the five top sellers are Japanese. But it's a bit silly for politicians to claim that cash-for-clunkers can be justified by environmental or economic concerns, and even sillier for Americans to pretend to believe them.

Declan McCullagh is a correspondent for CBSNews.com. He can be reached at declan@cbsnews.com.