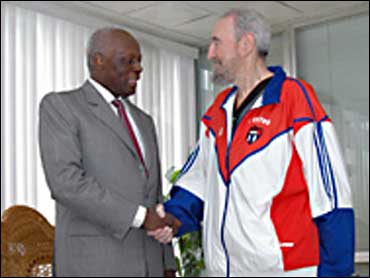 Cuba published a photo Sunday of a standing, smiling Fidel Castro looking heavier but still gaunt as he met with Angola's president, the first head of state to see the ailing 81-year-old since June.

The picture, which appeared on the front page of Communist Party youth newspaper Juventud Rebelde, shows Castro in a track suit, athletic pants and tennis shoes. The Cuban leader appears to have gained weight and wears a warm half-smile as he shakes hands with Angolan President Jose Eduardo Dos Santos, who was in Cuba since Thursday on an official visit.

The image was released two days after Castro gave a surprise hour-long interview on state television, during which he answered rumors about his death that have swirled recently in the United States by saying simply, "well, here I am."

Sunday's photo was the first time Castro has been seen standing in months. He stayed seated during the interview, which aired Friday evening just hours after officials said it was taped.

Held in an undisclosed location, the meeting between Castro and Dos Santos reportedly took place Saturday afternoon and lasted an hour and 45 minutes.

Castro has not appeared in public since announcing on July 31, 2006, that emergency intestinal surgery was forcing him to step down in favor of a provisional government headed by his 76-year-old brother, Raul.

The younger Castro addressed reporters Sunday on a tarmac in the province of Matanzas after seeing Dos Santos board a flight off the island. "There is a magnificent photo on the front page" of Juventud Rebelde, he said.

Fidel's condition and exact illness are state secrets, and before Friday it had been more than three months since Cuba's government released images showing his recovery, prompting rumors in Miami and elsewhere that he had died.

Dos Santos, who also met with Raul on Friday, is the first head of state to visit with the elder Castro since June 12, when the ailing leader's close ally, Venezuelan President Hugo Chavez, made a surprise visit to Havana.

Cuba and Angola have had close relations for more than three decades. The Caribbean nation sent as many as 350,000 military and technical personnel between 1975 and 1988 to help the Angolan government and the Namibian Liberation Movement defeat U.S.-supported rebels and South African troops.