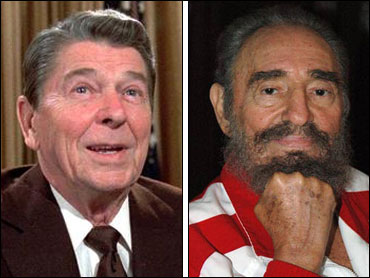 Fidel Castro says that Cuba once saved the life of U.S. President Ronald Reagan by giving American officials information about an assassination plot.

The essay published Wednesday in the Communist Party daily Granma appeared to be Castro's first public description of the matter. It seemed to be aimed at showing that Cuba had cooperated with the United States in the past.

Castro wrote that a Cuban security official stationed at the United Nations told U.S. mission security chief Robert C. Muller about an extreme right-wing group that was planning to assassinate Reagan during a planned trip to North Carolina in 1984.

"The information was complete: the names of those implicated in the plan; day, time and hour where the assassination could occur; the type of weapon the terrorists had and where they kept their arms; and along with all that, the meeting place of those elements planning the action as well as a brief summary of what had occurred in said meeting," Castro wrote.

Castro wrote that Cuban authorities learned later that the FBI had arrested several people in North Carolina and he said that several days after that, Muller expressed America's thanks to the Cuban official over lunch in a U.N. dining room.

The Cuban leader also wrote that when Reagan survived an assassination attempt in 1981, Havana formally condemned the act during a meeting with the head of the U.S. Interests Section in Cuba, Wayne Smith.

The press office of the U.S. State Department's Western Hemisphere Affairs in Washington did not immediately respond to a telephone call requesting comment.

Smith confirmed the 1981 meeting in Havana, though he said he had not heard about the 1984 plot.

"But just because I never heard about it doesn't mean it didn't happen," said Smith, who left Havana in 1982 and is now at the Center for International Policy think tank in Washington. "It isn't the kind of thing that the U.S. would want widely known."

Castro also accused the U.S. government of misleading the public about the Sept. 11 attacks in New York and Washington six years ago.

"It is now known there was deliberate disinformation" about the attacks, the Cuban leader wrote. "We were tricked like everybody else on the planet."

Castro's ally Venezuelan President Hugo Chavez also has promoted the idea that that the U.S. government was somehow involved in planning the terrorist attacks, despite wide evidence to the contrary.

Castro has not appeared in public since mid-2006, when he underwent intestinal surgery and ceded power to his younger brother Raul. In late March, he began writing occasional essays, most on international themes.