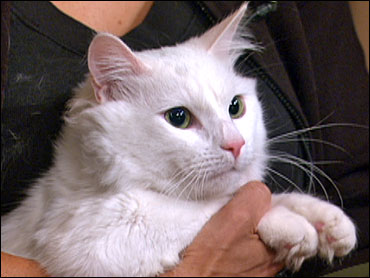 One hypoallergenic feline, 18-month-old Joshua, was on the set of The Early Show Thursday along with veterinarian Dr. Bernadine Cruz, an Allerca spokesperson.

Cruz told The Early Show's resident veterinarian, Dr. Debbye Turner, that she's allergic to cats, but Joshua doesn't produce any allergic reactions in her, such as watery eyes, an itchy throat, or runny nose.

And Elana Safar, who is very allergic to cats, couldn't believe how symptom-free she was after spending the morning with Joshua.

"I am shocked," Safar said. "I react to every cat. I cannot date someone who has a cat. This is amazing!"

Cruz explained that allergic reactions to cats are caused by a protein excreted in cat saliva, skin glands and urine. "Even if you have a totally hairless cat," Cruz says, "you still have the protein. A lot of people think it's dander (that causes allergic reactions), but it's the protein that does."

If cats lick their fur, the protein from their saliva gets on the fur.

Allerca says its researchers have figured out ways to harmlessly change the gene that produces the protein so the gene will make a form of the protein that provokes less of a reaction in humans. The company notes that it has a test to detect the genes that produce the less-problematic protein.

Cruz says a cat like Joshua costs roughly $4,000, due to the intense science involved but, "If you are allergic to cats and have always wanted one, then you can't put a price on it."

Before Allerca will send you one of its cats, it sends you a test to make sure you're not so allergic that you'd even react to hypoallergenic felines.

You can order Allerca's hypoallergenic cats through the company's Web site.