Sandra Hughes is a CBS News correspondent based in Los Angeles. 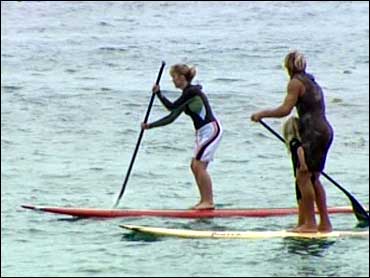 (CBS)
It was the day of the Chino Hill's earthquake when I met surfing legend Laird Hamilton. We were waiting to follow him off the Malibu coast for what was supposed to be a stand-up paddle surfing lesson for me – and an explanation of why he has so whole-heartedly taken on this new water sport.

It was an inauspicious way to start the day, with the earth shaking the way it did. But we tried not to let it rattle us. It didn't seem to bother Laird nor his adorable four-year-old daughter, Reece, who tagged along for our story.

We headed to the water and Laird, now 44-years-old, talked and talked about stand-up paddling. But realize this is the man when it comes to traditional surfing. He has conquered some of the biggest waves on the planet, up to 80 feet high. In 2000, he took what's considered one of the most daring surf rides ever, on a monster wave in Tahiti's Teahupo's break, a super-dangerous place to surf due to its razor-sharp reefs. Laird has also appeared in two surfing movies and his latest, "Water Man," is due out this month.

So it was only natural to wonder why he's hung up his surfboard and now professes his love of stand-up paddle surfing. Laird put it this way: "if you know anything about me, you know I'm always looking for a new way to cut an apple. I've gone wind surfing to foil surfing to tow surfing to stand-up. [It] was just a natural evolution."

And to watch him stand-up paddle surf does look like a natural evolution. That is because he is built like a Greek god and has the upper-body strength to go straight into on-coming waves standing up! That's the thing about paddle surfing. You jump on a 12- or 13-foot long board with one paddle and are supposed to be standing up on your way out into the waves. And if you're really good, like Laird, you make all this look like a beautiful symphony at sea. Once past the break point, you can paddle anywhere and everywhere until you decide to surf your way back to shore. Oh, and by the way, he says it's an amazing "core" workout.

But even if traditional surfers scoff, stand-up paddling is really taking off. You've maybe seen the pictures of Jennifer Aniston or Pierce Brosnan atop their big boards with a paddle in hand? And it's not just celebrities. On a recent trip to my local beach while watching my kids at surf camp, I noticed the stand-up paddle surfers were out in force.

Back to our meeting with Laird, which I mentioned earlier was supposed to be a lesson. Although I'm a gal from the Midwest who never learned to do more than water ski behind a boat (and that was a long time ago!) I decided to give it a try since Laird was going to be my coach. He took me out by watching each set of waves to make sure I wasn't going head first into a big one (since I wasn't able to balance yet and certainly didn't have his talent for taking the waves head-on). When we got a break he shoved my board out to sea and said. "meet you out there." Those could be terrifying words, if you didn't know Laird Hamilton was coming out behind you. He brought his daughter Reece (that's how good he is!) and the two of them made it out to greet me. Once I got used to paddling on my knees, Laird told me it was time to try and balance on that big board.

Believe it or not, I did it! While I wasn't near a big wave it was fun to know that I could balance and paddle and actually move the board along. And it is a lot of fun! The great thing about stand-up paddling is if like me, you're a little afraid of the ocean, you can stand up paddle on a lake, river or stream. So, I had been paddling for about 120 seconds when a small ripple came at me. Laird was ready with all sorts of good advice, but I still lost it by bouncing off the toe of the board, hitting my rump and flying not so gracefully into the water. I think I really scared him because he must have asked if I was alright about seven times. But I got back to my feet and paddled all around that Malibu beach. Although I never caught a big wave (I left that to Laird) I felt like this is a sport you can pick up at any age and really enjoy pretty quickly. Oh, and about that core work-out; the next day I was sore from my neck on down. But it was well worth the experience. I've got pictures to prove it. Watch tonight's Evening News and you'll see!