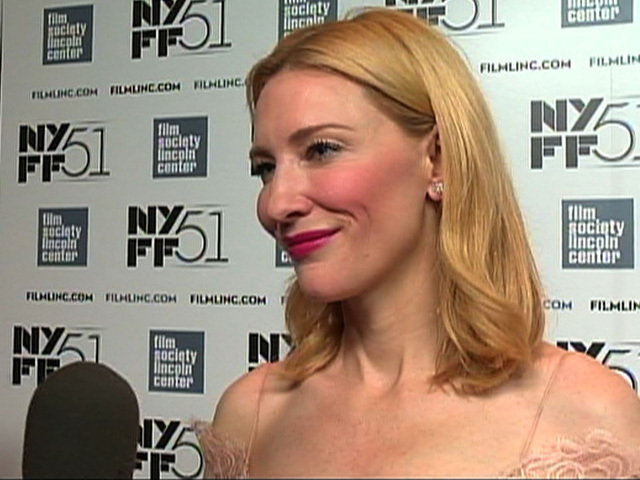 Call it icing on the cake.

After already winning two Golden Globes and an Oscar, Cate Blanchett was honored by the Film Society of Lincoln Center at the New York Film Festival on Wednesday with a special tribute gala celebrating her career.

The Australian-born actress, 44, has starred in a wide array of films over the last two decades, attracting critical acclaim for performances in films such as "Elizabeth," "Notes on a Scandal," and David Fincher's "The Curious Case of Benjamin Button."

In addition, Blanchett has starred in Peter Jackson's "Lord of the Rings" and "The Hobbit" trilogies. In 2005, she won a best supporting actress Oscar for her performance as Katharine Hepburn in Martin Scorsese's "The Aviator." She also attracted notice as one several actors who portrayed facets of Bob Dylan's persona in 2007's "I'm Not There."

Her latest film role, as the tormented lead in Woody Allen's "Blue Jasmine," has once again brought her rave reviews and spurred talks of a possible second Oscar win.

Blanchett spoke to CBSNews.com at the NYFF gala, where we asked which one of her film roles was her favorite.

"It's hard to say, because sometimes you enjoy it at the time and that doesn't necessarily mean that it makes for a great film," she replied. "So often you're own personal enjoyment of things is entirely different from the finished product."

She did go on to name some of her favorite past projects: "I relished playing Blue Jasmine. I loved playing the version of Bob Dylan. Working with David Fincher was remarkable...In the end, I think what I remember most is not necessarily the role but it's the dialogue that you have with the director."

We also asked Blanchett to name some of her most challenging and most fun roles. Watch video above to hear her picks.