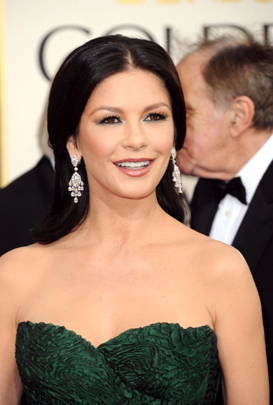 (CBS/AP) NEW YORK A month after discovering husband Michael Douglas was cancer free; Catherine Zeta-Jones was given another reason to celebrate.

The Award winning actress has become a Commander of the Order of the British Empire. Zeta-Jones, 41, was awarded with the honor by Prince Charlies in a ceremony in Buckingham Palace earlier today.

On hand for the event was her husband, two-time Oscar winner Michael Douglas and their two children, Carys and Dylan. Last year Douglas, 66, was diagnosed with throat cancer and spent much of 2010 undergoing treatment. Last month, the "Wall Street" star announced that he was cancer free.

Catherine Zeta-Jones is known for her roles in the films in "Chicago" (2002), which scored her an Oscar for best supporting actress, "The Legend of Zorro" (2005) and "No Reservations" (2007)