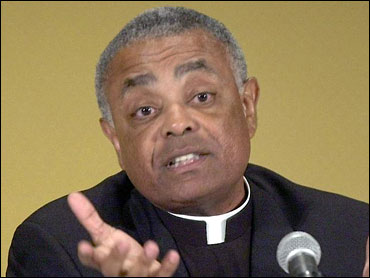 Roman Catholic bishops from across the United States begin today a four-day meeting to adopt a new discipline policy for sexually abusive priests.

Victims' advocates and lay reformers have assembled in a hotel across from the gathering to signal their anger with the revisions, which they say could keep molesters in parishes.

The U.S. Conference of Catholic Bishops approved a disciplinary plan when it last met five months ago in Texas. The policy before the group now is a revision negotiated with the Vatican that protects priests' rights and underscores that bishops, not lay people, have the authority to oversee clergy.

Bishops insist the new version maintains their commitment to removing all abusers from church work, but victims' advocates argue the process will be too cumbersome and secretive.

"We are calling on America's bishops to strengthen, not weaken, the promises they made in Dallas," said David Cerulli, a member of the Survivors Network of Those Abused by Priests (SNAP).

Whatever plan is adopted this week will stand for at least two years if it wins Vatican approval. Many prelates expect completion of the policy will ease public pressure for reform.

Bishop Wilton Gregory of Belleville, Illinois, president of the bishops conference, is opening the meeting with a morning address. In the afternoon, representatives of the committee that drafted the policy and another panel formed to enforce the charter were providing updates on their work.

Later in the week, bishops will vote on a spending plan that would allocate nearly $1 million in each of the next two years for addressing abuse. The budget proposal also notes that the bishops conference has spent more than $1 million this year on the crisis.

Victims' advocates held a news conference and protest Sunday - some holding photos of victims, others weeping - to exert some influence over the debate, but their ability to win changes in the plan is limited.

Victims and lay people had unprecedented access to church leaders at the Dallas gathering, holding private talks with cardinals and addressing the full meeting of bishops. No such discussions have been scheduled this week, although SNAP said it requested a role.

"We are undaunted," said SNAP board member Mark Serrano. "We will work every day and every night this week to speak to individual bishops."

Since June, public attention has also shifted from a sole focus on helping victims to preserving priests' rights, prompted by criticism that the bishops' original plan did not provide due process for accused priests.

SNAP discussed its criticism of the new plan Friday in a phone call with Oklahoma Gov. Frank Keating, chosen by the bishops to lead a National Review Board to ensure that dioceses are meeting the new disciplinary standards.

The review board is also meeting Monday, but only the bishops can set policy.

The new plan includes church tribunals to hear the cases of clerics who maintain their innocence and preliminary investigations that bishops will conduct privately to protect the reputation of the accused.

The revisions also reinstate the church's statute of limitations on bringing complaints. The alleged victim must come forward by age 28, but bishops still can ask the Vatican for a waiver in special cases.

Leaders of the group Voice of the Faithful, which claims 25,000 members, also are in Washington to urge the bishops to restore the power of lay review boards to monitor abuse cases. Under the revised plan, the boards are advisory only.

Peter Isely, a SNAP leader from Milwaukee, said he and other advocates will continue to pressure the church even after the bishops end their meeting Thursday, most likely after adopting a national plan to cope with the problem.

"Catholics are going to stay in this," Isely said. "This is not the end of the story by any means."