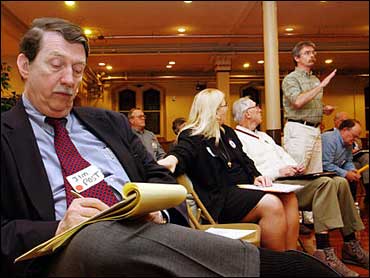 Formed by rank-and-file Roman Catholics alarmed at clerical sex abuse, Voice of the Faithful has gone in just 10 months from meeting in a single Massachusetts parish to claiming some 25,000 lay members.

It also has become the most controversial group in the American church - an institution known for a powerful hierarchy relatively unswayed by opinions or actions taken by Catholics who are not part of the clergy.

Voice, which emerged from January open forums at a Wellesley parish, has reached into 33 states, recruiting many members via the Internet. It has 37 parish chapters in Massachusetts and 41 elsewhere.

Leaders and members of the organization see themselves as loyal Catholics working for reform. Their efforts are nonetheless criticized by some conservatives as subversive to the hierarchy and church teaching.

Seven bishops, in Connecticut, Maine, Oregon, New Jersey and New York, have banned the group from meeting on church premises. After months of resistance, Boston's Cardinal Bernard Law relented on that same policy to some extent, saying that existing Voice chapters may continue meeting in parishes but any newly formed chapters will not have the same access.

Voice of the Faithful members have expressed outrage over policies banning them from church properties which were, they point out, paid for with funds collected from the Catholic laity.

He said Voice functions "as a cover for dissent, to cause division within the church and to openly attack the church hierarchy." The group's agenda is "anti-church and, ultimately, anti-Catholic," he charged.

The fight over meeting places is more than symbolic. Though gatherings can be held in other buildings, a parish presence is crucial for recruiting members and giving Voice legitimacy as a Catholic organization.

Voice President James Post, a Boston University professor of management who specializes in ethics and corporate accountability, thinks widespread bans by bishops would "put us out of existence or limit our growth."

He sent an explanatory letter to all U.S. bishops, saying they may have been misled, and arguing that Voice has the right to exist under church law.

Post informed the bishops that Voice wants to "shape structural change within the Church" and believes that lay involvement "is central to correcting the causes of the current crisis." He invited bishops to comment on a proposed Voice plan to promote the laity's role in parish government.

In Boston, a Voice delegation last week conferred with an official of the Boston Archdiocese for the first time in four months, and was told Law is willing to hold his first meeting with the organization's leaders.

The agenda will include Law's partial meetings freeze, and the fate of $56,000 that Voice raised directly for Catholic causes in Boston. The cash came from irate parishioners who boycotted Law's annual fund appeal and wanted their money to go straight to the charities. Last July, the archdiocese said church agencies cannot accept Voice gifts because they bypass the cardinal.

All this notoriety is quite an achievement for an organization that only incorporated in June, hired Executive Director Steve Krueger in July, and moved into a nondescript office in the Boston suburb of Newton a month later. It has yet to win a badly needed tax exemption.

Krueger, a financial consultant who took a huge pay cut in his new post, says a spiritual awakening led him to conclude seven years ago that re-energized lay members must "transform and strengthen the church." The abuse tragedy is providing the necessary impetus, he feels.

Since Krueger's full-time paid staff numbers three, operations depend mostly on volunteer labor from hundreds of people like widow Mary Ann Keyes, who often spends 16-hour days organizing leaders around the country. Sometimes, she says, "I think, dear God, give me the energy to get through another day."

Voice has worked hard to cultivate a moderate image - for example, it hasn't demanded Law's resignation. But moderation isn't always easy. At its October council meeting, for example, delegates spent an hour debating caution versus militancy in handling the bishops' bans.

Another challenge is avoiding the church's left-right splits. Post says Voice represents Catholicism's "great center" and welcomes conservatives and liberals if they agree with its vision of lay activism. The organization does not question the hierarchy's authority or any church teachings, he insists.

But two small Boston groups contend that Voice's intent is to overhaul traditional teachings on matters like abortion, celibacy and homosexuality.

More weighty on a national level is a campaign by editor Deal Hudson of Crisis magazine. He considers Voice's moderate pose deceitful, given the liberals who spoke to 4,000 supporters at the group's inaugural convention last July.

To calm fears among such conservatives and the bishops, Voice's Nov. 21 council meeting will take up a proposed credo that would affirm the authority of the church, the bishops and the pope, and declare: "We believe what the Catholic Church believes."

Voice's survival is no certainty.

Cash reserves gave fallen from $130,000 to half that over the past month, and lack of tax exemption could hobble a vital year-end fund drive. More importantly, it has never been possible to enlist substantial numbers of lay Catholics behind any effort of this sort in the long term.

Krueger is undaunted, not only because he specialized in business startups but also because he believes the cause has divine support.

"It's a Spirit-driven movement," he says, "so 100 percent of the responsibility doesn't rest on our shoulders."