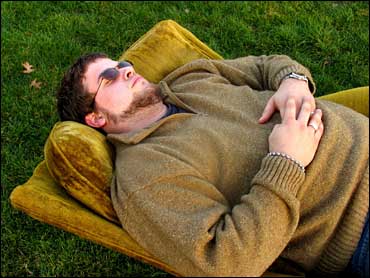 HOW CAN A MIDDAY NAP IMPROVE YOUR BRAIN'S LEARNING POWER?

A small study of 39 people found that a midday nap helped them in memory exercises. Those who napped performed 20 percent better than those who didn't. Researchers believe the sleep may help clear out a part of the brain called the hippocampus -- the brain's short-term memory storage -- and make room for new learning and information.

That may be particularly important for students who are prepping for an upcoming exam -- sleep may improve their studying and retention of information.

Other parts of the world have been practicing this, such as Spain, where people take siestas -- nap breaks during the day.

ACCORDING TO THE LATEST RESEARCH, HOW LONG DOES A NAP HAVE TO BE TO BOOST YOUR MEMORY?

In this particular study, they napped 90 minutes in the middle of the day, around 2 p.m. However, the researcher, Matt Walker from the University of California - Berkeley,says it's really specifically about one type of sleep in general: -- stage 2, non-REM sleep. This type of sleep happens between deep sleep and the dream state -- and may account for half of your sleep. Researchers once believed this phase was merely a transition, but this new study shows that it may have more restorative functions to your memory and brain.

SLEEP'S NOT JUST VITAL TO MEMORY. HOW IT CAN BE IMPORTANT TO OVERALL HEALTH?

It can help regulate your moods, productivity, weight and energy levels. Sleep's just as important as exercise and diet -- studies have shown that not getting enough sleep can make you heavier, because sleep deprivation plays tricks on the hormones (leptin and ghrelin) that can control your appetite. A previous study found that sleep deprivation increased the desire for high carbohydrate, calorie-dense foods.

Every person has a different "sleep number," but according to the National Sleep Foundation, the general rule of thumb is seven-to-nine hours of sleep per night.

IF YOU ARE GOING TO TAKE A NAP, WHAT ARE SOME WAYS TO GET THE MOST OUT OF IT?

Find your sweet spot for sleeping -- a place where you can easily fall asleep, limit the noise and light -- and find a place where the temperature is comfortable. Don't nap too late in the day -- it may affect your nighttime sleeping patterns and make it harder to fall asleep. Limit your naps -- you may want to sleep forever, but previous research shows that nap that lasts longer than 30 minutes can make you feel groggy, rather than refreshed. A short nap, around 10-20 minutes, improves short-term alertness.