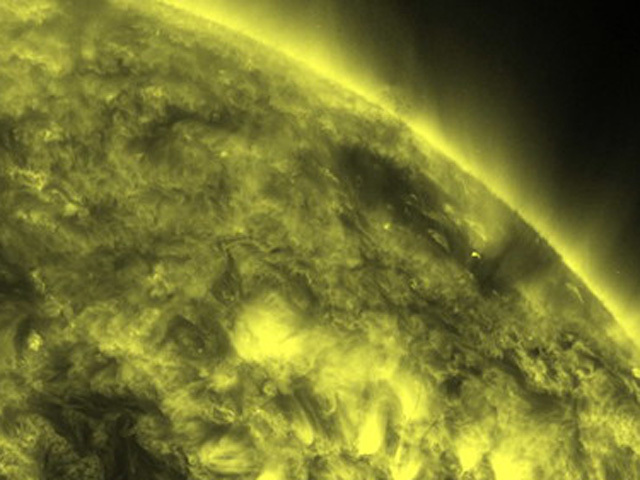 The death of a comet that plunged into the sun was captured on camera this month for the first time in history, scientists say.

The comet met its fiery demise on July 6 when it zoomed in from behind the sun and melted into oblivion as it crashed into the star. It was NASA's Solar Dynamics Observatory (SDO), a satellite orbiting Earth that studies the sun, which witnessed the comet's death-blow.

One of the SDO spacecraft's high-definition imagers "actually spotted a sun-grazing comet as it disintegrated over about a 15 minute period (July 6, 2011), something never observed before," SDO officials said.

Comets have been spotted near the sun before, but last week's object was the first to be observed in real-time as it disappeared.

"Given the intense heat and radiation, the comet simply evaporated away completely," SDO officials said.

The comet was a type known to astronomers as a sun-grazing comet because its path brought it extremely close to the sun.

The Solar and Heliospheric Observatory, a joint NASA-European Space Agency spacecraft, also spotted the comet's demise and recorded a video of the event.

"This is one of the brightest sun-grazers SOHO has recorded, similar to the Christmas comet of 1996," SOHO project scientist Bernhard Fleck said in a statement.

SOHO officials said that, because of the angle of the comet's orbit, it passed across the front half of the sun and appeared to brighten as it struck hotter particles above the solar surface.

Sun-grazing comets are relatively common and are also known as Kreutz comets, after the 19th century astronomer Heinrich Kreutz who first showed they were related.

Astronomers suspect that Kreutz comets all began as a single, giant comet that broke apart several centuries ago.