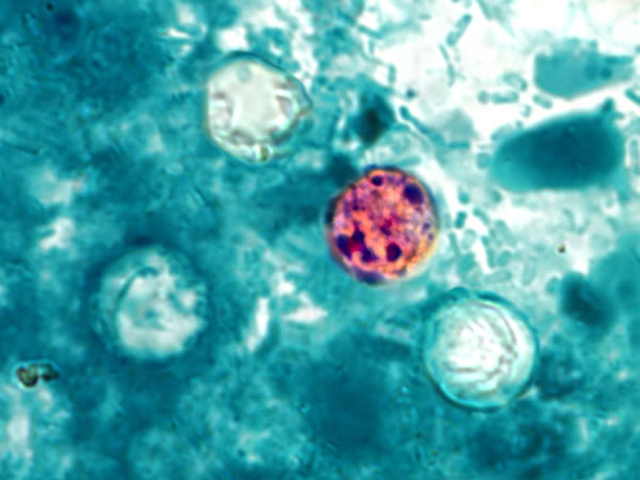 LINCOLN, Neb. Nearly 400 people across the country have been sickened by cyclospora, a lengthy intestinal illness usually contracted by eating contaminated food. But if you're looking to find out exactly where it came from, you may be out of luck.

Federal officials warned Wednesday that it was too early to say whether the outbreak of the rare parasite reported in at least 15 states was over.

Health officials in Nebraska and Iowa say they've traced cases there to prepackaged salad. They haven't revealed the company that packaged the salad or where it was sold, explaining only that most if not all of it wasn't grown locally.

The lack of information has fueled concern from consumers and food safety advocates who argue that companies should be held accountable when outbreaks happen and customers need the information about where outbreaks came from to make smart food choices.

"If you want the free market to work properly, then you need to let people have the information they need to make informed decisions," said Bill Marler, a Seattle attorney who specializes in class-action food-safety lawsuits.

Mark Hutson, who owns a Save-Mart grocery story in Lincoln, Neb., said he was unaware of customers who had raised concern about the product, which was unusual in situations involving foodborne illnesses. But Hutson said the lack of specific brand information threatened to hurt all providers, including the good actors that did nothing wrong.

"I think there was so little information as to what was causing the problem, that people just weren't sure what to do," he said. "Frankly, we would prefer to have the names out there."

Authorities said they still hadn't determined whether the cases of cyclospora in the different states are connected.

Only Iowa and Nebraska officials had directly linked the outbreak in their states to a salad mix of iceberg and romaine lettuce, carrots and red cabbage.

Heath authorities in California, which provides much of the nation's leafy green produce, said Wednesday the state had not received any reports of cyclospora cases.

"Based on the most currently available information, the leafy greens being implicated in this outbreak were not grown or processed in California," added spokesman Corey Egel in a statement to the Associated Press.

Still, grocery shoppers far from known outbreak areas acknowledged it was a factor as they shopped for produce.

"I can't say I really want to go and buy particularly any lettuce right now," said Laura Flanagan, 35, who was shopping at a Whole Foods in Dallas with her two young children. "I'm being pretty cautious about it."

The product was widely distributed in Iowa by wholesalers who could have supplied the bagged salad mix to all types of food establishments, including restaurants and grocery stores, said Iowa Food and Consumer Safety Bureau chief Steven Mandernach.

Mandernach said at least 80 percent of the vegetables were grown and processed outside both Iowa and Nebraska. He said officials haven't confirmed the origins of 20 percent and may never know because victims can't always remember what they ate.

Iowa law allows public health officials to withhold the identities of any person or business affected by an outbreak. However, business names can be released to the public if the state epidemiologist or public health director determines that disclosing the information is needed to protect public safety.

Mandernach said there is no immediate threat, so his office is not required to release information about where the product came from. He said state officials believe the affected salad already has spoiled and is no longer in the supply chain.

"I am by no means giving all-clear, green light on the issue," said Dr. Joseph Acierno, the state's chief medical officer and director of public health. "We're encouraging the medical community to stay vigilant."

"It's not clear what the policy is, and at the very least they owe it to us to explain why they come down this way," said Sandra Eskin, director of the Pew Charitable Trusts' food safety project. "I think many people wonder if this is all because of possible litigation."

Marler said withholding the information can create general fears that damage the reputation of good actors in food production. He said consumers should be allowed to decide for themselves whether to shop and grocery stores or eat at restaurants where tainted produce was sold.

Some states also are slow to interview infected people, he said, which reduces the chances that they remember where they ate.

The Food and Drug Administration said Wednesday that it didn't have enough information to name a possible source of the outbreak. In the past, the agencies have at times declined to ever name a source of an outbreak, referring to "Restaurant A" or using vague terms.

Caroline Smith DeWaal of the Center for Science in the Public Interest says that the decision to withhold a company's name may not only hurt consumers but the food industry, as well. When an item is generally implicated but officials give few specifics, like with the bagged salad, people may stop buying the product altogether.

Responsibility for disclosing the names of businesses involved general falls to the U.S. Food and Drug Administration because their authority crosses state lines, said Doug Farquhar, a program director with the National Conference of State Legislatures. Farquhar said most states have laws that prohibit the disclosure of businesses that are affected by a foodborne illness.

"In some cases, states go `rogue' and release the names without FDA approval, in the name of public safety," Farquhar said. "But for the most part, states prefer to let the FDA release the names and take the heat.