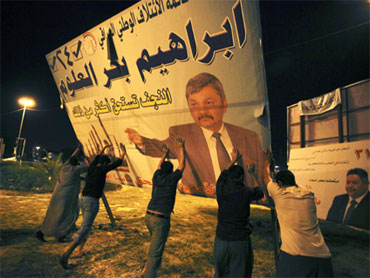 A day after Iraqis went to the polls to elect their next government, voters in Baghdad remained weary of corruption and tired of political excuses, but seemed relatively upbeat following an election that went far smoother than most had even hoped for.

CBS News correspondent Elizabeth Palmer reports that Sunday's parliamentary election was a huge logistics exercise, with 10,000 polling centers across the country, a possible 10 million voters, and more than 2,000 candidates.

The results of the pivotal vote will be released within days, the head of the country's election commission said Monday, just a day after Iraqis defied a wave of insurgent attacks and voted in key balloting that will determine whether they can overcome deep sectarian divides that almost tore the nation apart.

It will also usher in a new government as U.S. forces prepare to leave.

The head of Iraq's election commission said Monday turnout for the election was between 55 and 60 percent. That's down from the previous parliamentary election in December 2005, when roughly 76 percent of voters turned out, but higher than last year's provincial elections when just over half of voters went to the polls.

Faraj al-Haidari, who heads the Independent High Electoral Commission, told The Associated Press that the exact figures would be released later Monday at a news conference.

The election day's death toll was 36, with rockets and mortars raining down on parts of Baghdad on Sunday morning, insurgents hurling hand grenades at voters and a bomb going off in a polling station.

Iraqis are fed up with religious-based violence and are desperate for a government that can deliver on things like clean water, schools and jobs.

"We need change," one Baghdad voter told Palmer. "We need new faces to get anything done."

But, on the whole, people seemed cautiously optimistic.

Al-Haidari told the AP on Monday the vote's preliminary results would be released within two or three days, most likely on Thursday.

"Although all estimates of the election results are speculative, it appears likely that none of the major coalitions have garnered enough votes to choose the next Prime Minister without support from other segments of the voters, in an election with high stakes for the planned troop withdrawal of the Obama Administration," said CBS News foreign affairs analyst Pamela Falk from the U.N.

Across Iraq, people were recovering from the elections, taking down campaign posters and burying those who died in the violence. Iraqi security forces lifted an all-night curfew in place to deter attacks and ease movement of ballot boxes to counting stations.

The elections, however, will not spell an immediate end to political uncertainty. The fractured nature of Iraqi politics means it could take months of political wrangling by various groups to form the new government.

Many in the capital told CBS News they hoped that the power sharing that will necessarily come when the votes are counted won't lead to government paralysis - or worse, more fighting and bombs.

U.S. Ambassador to Iraq Christopher Hill, speaking on CBS' "The Early Show" Monday, said it would likely take months for the various political coalitions seeking power to work out a power-sharing deal and form a new government once the votes were counted. He said Iraq's recognized that, but were ready for change.

The election "will help set the tone for Iraq for many years to come," said Hill. "The Iraqi people want to see some progress."

A number of parties announced their own preliminary results, but Iraq's election commission has warned against speculating on the outcome. Counting the poll's complicated ballot - some 6,200 candidates competed for 325 parliamentary seats - will take time.

Not everyone was totally satisfied with the polling. An official from the Iraqi Electoral Commission tells Palmer they think many more people wanted to vote, but the huge rural population (many poorly educated) didn't understand the system.

Many people went to the wrong polling stations, and the system - designed to prevent fraud - was absolutely inflexible. Each voter was registered in one place only, says Palmer, so if you turned up at the wrong one, you were not permitted to cast a ballot. There was a provision for people who showed up at the wrong polling station but could prove they lived in the area, but weren't on the list. They were given a provisional ballot - that will be counted once their identity is verified.

U.S. officials praised the vote, some playing down the violence and praising the U.S.-trained Iraqi security forces.

"We mourn the tragic loss of life today, and honor the courage and resilience of the Iraqi people who once again defied threats to advance their democracy," President Obama said in a statement.

Speaking to CBS "Early Show" co-anchor Maggie Rodriguez Monday morning, top U.S. commander in Iraq Gen. Ray Odierno said he saw nothing on election day that made him think it would be necessary to immediately consider changing President Obama's plans for a full U.S. military withdrawal by the end of this year.

"We always will do assessments of the situation," Odierno said, adding caution to his positive outlook.

The election also highlighted the upcoming withdrawal of U.S. troops. Obama has pledged to withdraw all combat troops by end of August and the rest by the end of next year.

No one coalition is expected to win an outright majority in the 325-seat parliament, so the coalition that gets the largest number of votes will be tasked with cobbling together a government with other partners.

Prime Minister Nouri Al-Maliki, who campaigned as the head of his State of Law Coalition as the best candidate to ensure security, faced a double challenge at the polls.

On one side there was a coalition of Shiite religious parties, including one led by the popular anti-American cleric Muqtada al-Sadr, who didn't run himself.

On the other side, al-Maliki was challenged by former Prime Minister Ayad Allawi, a secular Shiite, whose nonsectarian stance and criticism of the current government has won him both Shiite and Sunni supporters.

The two Kurdish parties, KDP and PUK have been known for their political unity and thought to be key to forming any government. But even their dominance has been challenged by an upstart party called "Gorran," potentially weakening the Kurdish front.

Ahmad Chalabi: A one-time Pentagon favorite and insider, Chalabi is running in the same coalition led by the Supreme Islamic Iraqi Council and the Sadrists. He failed to win a seat in the last parliamentary election in 2005, but is virtually assured of one this time around. Chalabi's relations with the United States soured when the intelligence he provided the Americans on Saddam's weapons of mass destruction proved faulty. The U.S. also accused him in 2004 of spying for Iran. Chalabi is a secular Shiite who is loathed by the country's Sunni Arab minority for the zeal he has shown in rooting out Saddam's loyalists from jobs in the government, armed forces and security agencies.