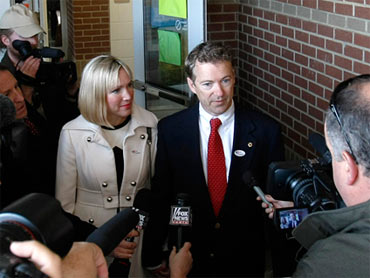 CBS News estimates that in Ohio, where polls closed at 7:30, Republican Rob Portman is leading Democrat Lee Fisher in the Senate race. It is too early to say anything about the Senate races in North Carolina or West Virginia, where polls have also closed. Democratic Sen. Patrick Leahy is the estimated winner in Vermont, and Republican Sen. Jim DeMint is the projected winner in South Carolina.

As polls continue to close across the country, Republicans are poised to win back dozens of congressional seats and possibly regain control of the House. The new balance of power will present a challenge for the president as he attempts to continue with his agenda through the second half of his term, and it will give voters renewed expectations for progress in Washington.

Republicans need to gain 39 seats in the House to win control and 10 in the Senate. Voters may be willing to put the GOP back in power after growing impatient with the poor economy and high unemployment rates that have lingered under Democratic control.

Indiana's independent vote was particularly important for Mr. Obama in 2008, when voters helped him become the first Democratic presidential candidate to win the state in 45 years. In 2008, 54 percent of independents voted for Mr. Obama, while 43 percent voted for McCain. This year, however, preliminary exit polling shows 60 percent of independents supporting Coats, the Republican, and just 32 percent voting for Ellsworth.