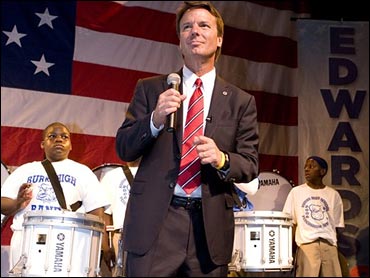 John Edwards continues to trail Senators Hillary Clinton and Barack Obama in a three-way national race for the Democratic nomination, according to the results of the latest CBS News poll.

Even though most Democratic primary voters think Edwards has the right kind of experience to be president, fewer than half are confident in the former senator's ability to handle an international crisis.

And despite his prominent campaigning on issues such as poverty and health care, 3 in 10 think his policies would favor rich people and not other income groups.

Among Democratic primary voters asked their preference to be the party's nominee among the three front-runners, Edwards received 14 percent versus 45 percent for Clinton and 25 percent for Obama. These standings have not changed much over the summer.

IF THESE WERE THE CANDIDATES, WHO WOULD YOU WANT AS DEM NOMINEE?

Sixteen percent of Edwards' backers say they prefer him mostly because they dislike the other candidates, something few Clinton and Obama supporters say.

WHO WOULD EDWARDS' POLICIES FAVOR?

(Among All Voters)
Rich

9%
Treat all the same

7%
Treat all the same

Much of this presidential campaign has focused on experience and just under half of registered voters say Edwards, who served one term in the U.S. Senate, has the right kind of experience to be president. More of those intending to vote in a Democratic primary — 60 percent — say he does. Clinton gets better marks than Edwards on this measure but Obama does less well than Edwards.

When it comes to international matters, more voters are uneasy than confident in Edwards' ability to handle an international crisis wisely. Forty-six percent are uneasy about his approach, while 38 percent express confidence in him. Among Democratic primary voters, 47 percent have confidence that Edwards will deal wisely with an international crisis. Again here, Edwards does a bit better than Obama on this measure, but Clinton gets better marks than both of them. Challengers usually fare less well than incumbent presidents do on this measure.

Opinions of Edwards overall among registered voters are divided: 31 percent hold a favorable view of him, while 30 percent view him unfavorably. Thirty-eight percent are undecided or haven't heard enough about him. Democratic primary voters are more inclined to like him — 42 percent of those voters view Edwards favorably, but that rating is down seven points from July.

Voters overall have a favorable view of John Edwards' wife, Elizabeth, but she still remains unfamiliar to a significant number of voters. Democratic primary voters are even more likely than all voters to have a favorable opinion of her.

Mrs. Edwards, although diagnosed with a recurrence of cancer early this year, has spent a lot of time campaigning for her husband. Seven in 10 primary voters describe her level of involvement in the campaign as "about right." Seven percent say she is "not involved enough," while a similar number says she is "too involved."

A solid majority of Democratic primary voters also think former President Bill Clinton is spending the right amount of time on his wife's campaign. But 13 percent think he should have more involvement, while 6 percent say he is too involved.

Edwards does better with Independents who plan to vote in a Democratic primary than with self-identified Democrats. He gets more support from men than women. As for income, Edwards does best among those who earn between $30,000 and $75,000 a year.

Eleven percent of Southerners back Edwards, but despite his Southern roots, he gets more support in the Midwest (16 percent) and the West (21 percent). Edwards gets the support of just 9 percent of Democratic voters in the Northeast.

This poll was conducted among a random sample of 1,214 adults nationwide, interviewed by telephone August 8-12, 2007. The error due to sampling for results based on the entire sample could be plus or minus three percentage points. The error for subgroups is higher. An oversample of African Americans was also conducted for this poll, for a total of 169 interviews among this group and 149 African-American registered voters. The results were then weighted in proportion to the racial composition of the adult population in the U.S. Census. The margin of error for African-Americans (overall and registered voters) is plus or minus 8 percentage points.