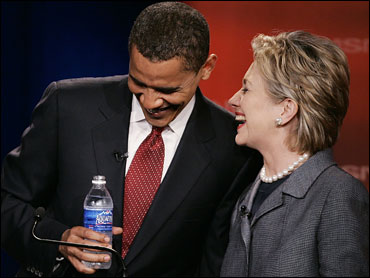 Sen. Barack Obama's perceived lack of experience may be a huge obstacle to his chances of winning the Democratic presidential nomination, according to a CBS News poll released Wednesday.

While Obama is seen as the candidate offering fresh new ideas, Sen. Hillary Clinton is seen as the one with the right experience to be president. Clinton continues to hold a commanding lead over Obama, 45 percent to 25 percent, among those planning to vote in a Democratic primary. Former Sen. John Edwards is third with 14 percent.

IF THESE WERE THE CANDIDATES, WHO WOULD YOU WANT AS DEM NOMINEE? (Among Democratic Primary Voters)

Clinton is also seen as being more electable than Obama, and some voters think Obama's race and even his name may be a problem for him next November.

More than half of voters (51 percent) think Obama, a first-term U.S. senator from Illinois, does not have the right kind of experience to be a good president, compared with 29 percent who think he does.

On the other hand, 59 percent of voters think Clinton, the former first lady and a two-term senator from New York, has the right experience, while 35 percent think she does not.

RIGHT EXPERIENCE TO BE PRESIDENT? (Among registered voters)

Voters are confident that both candidates would make good decisions about dealing with foreign countries, although Clinton scores slightly better. Far fewer voters have confidence in Obama's ability to deal with an international crisis. Many are doubtful about Clinton in this area, too.

Obama does have an advantage when it comes to new ideas. The Illinois senator has presented himself as the candidate of change, and voters view him that way. Sixty-one percent think he'd try new ways of solving the country's problems, while just 18 percent think he'd stick to familiar approaches.

Voters are divided as to whether experience or new ideas matter more in a presidential candidate. Which quality they prefer influences how they vote. Among Democrats who value experience, Clinton leads Obama by more than three to one, 49 to 16 percent. Among those who value fresh ideas, Obama leads Clinton, 38 to 35 percent.

Obama is seen as being better at connecting with voters than Clinton, and is considered more likeable. But voters see Obama as less electable than Clinton: Forty-six percent of registered voters think he could be elected president if he wins the Democratic nomination, while 62 percent think Clinton cold be elected.

Can They Win? (Among registered voters)

Among Democratic primary voters, 76 percent think Clinton can win, as do 54 percent for Obama.

Obama may have additional hurdles to clear with some voters because of his ethnicity and his name.

However, Clinton's gender is also working against her: 37 percent of voters who think she can't win say it's because she's a woman; another 25 percent say it's because people dislike her or her husband.

This poll was conducted among a random sample of 1214 adults nationwide, interviewed by telephone August 8-12, 2007. The error due to sampling for results based on the entire sample could be plus or minus three percentage points. The error for subgroups is higher. An oversample of African Americans was also conducted for this poll, for a total of 169 interviews among this group and 149 African American registered voters. The results were then weighted in proportion to the racial composition of the adult population in the U.S. Census. The margin of error for African Americans (overall and registered voters) is plus or minus 8 percentage points.