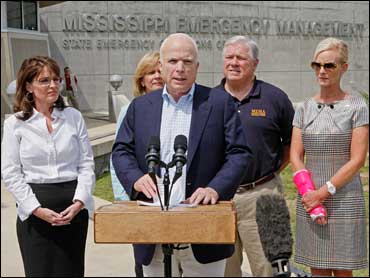 As Hurricane Gustav prepared to strike the Gulf Coast, the Republican Party and the McCain campaign decided to curtail most of the planned activities of the first day of their convention in St. Paul, Minn. According to a new CBS News Poll, three-quarters of Americans approve of that decision.

Ten percent disapproved of the changes.

Americans also approve of President Bush's handling of the response to Gustav, according to the poll. Fifty percent of Americans who know enough to say approve of Mr. Bush, compared to 19 percent who do not. However, 31 percent of those interviewed Monday and early Tuesday don't know enough yet to say.

That's in stark contrast with Katrina three years ago, when Mr. Bush received very low marks from the public for his handling of the disaster. In the weeks after Katrina hit in 2005, 58 percent of Americans disapproved of Mr. Bush's handling of it, compared to 38 percent who approved.

This poll was conducted among a random sample of 342 adults nationwide, interviewed by telephone September 1-2, 2008. Phone numbers were dialed from RDD samples of both standard land-lines and cell phones. The error due to sampling for results based on the entire sample could be plus or minus five percentage points. The error for subgroups is higher.