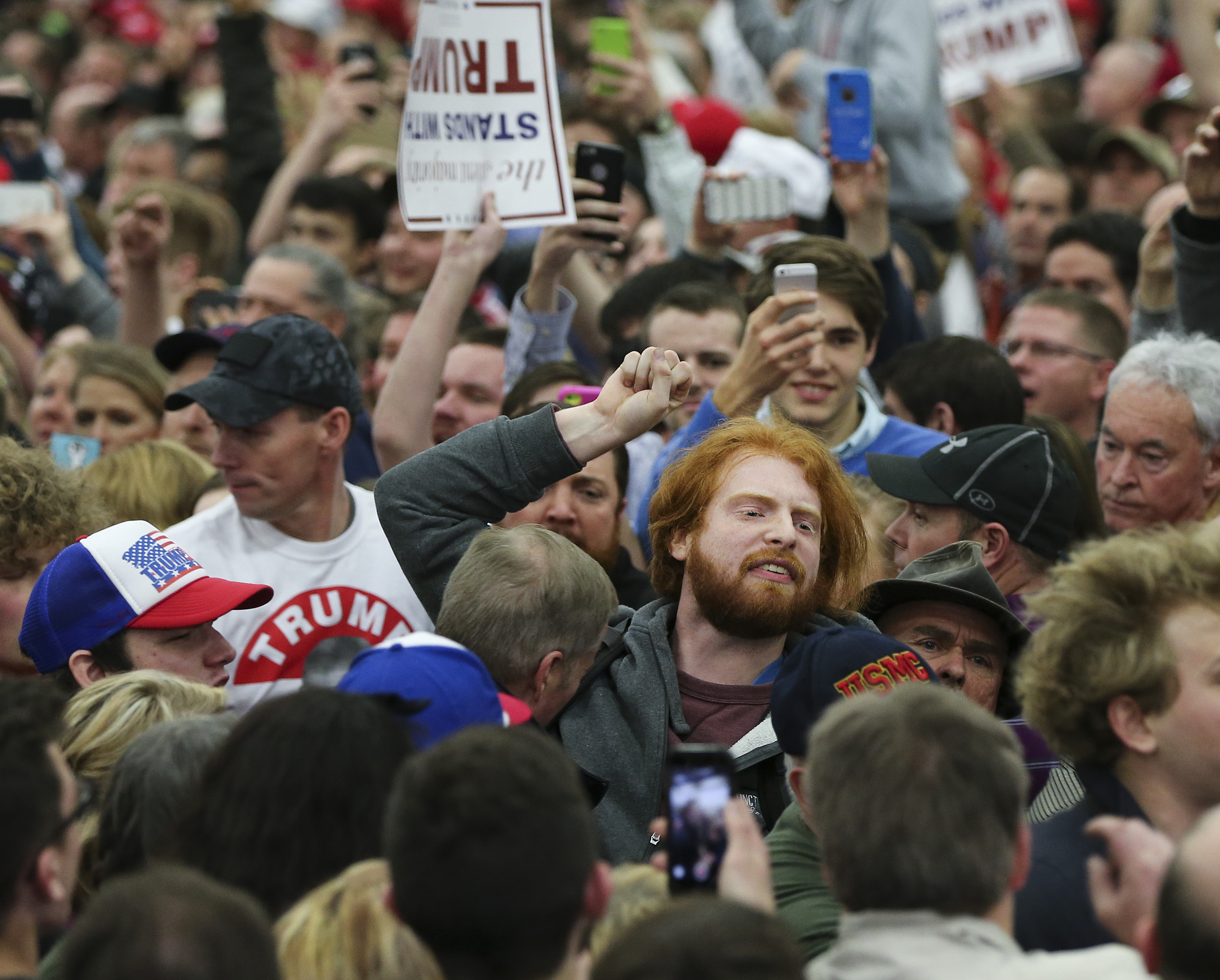 Where the Race Stands

Although the percentage that supports each of the three remaining candidates has risen since Jeb Bush, Ben Carson, and Marco Rubio left the race, Donald Trump has made the most gains. Support for Trump has risen eleven points -- from 35 percent in February to 46 percent now -- while support has risen eight points for Ted Cruz and nine points for John Kasich.

Donald Trump continues to dominate his rivals among nearly every demographic group. He leads among Republicans and independents, men and women, white evangelicals, both moderates and conservatives - including very conservative voters - and Americans of all income levels.

Most registered voters overall have heard a lot about these incidents of violence, and they are more likely to blame the protesters and Trump supporters equally. Forty-three percent of registered voters blame both sides, while 29 percent of voters think it's the protesters who are mostly to blame for these incidents and 23 percent mostly blame Donald Trump's supporters.

A Brokered Convention and the Campaigns

On a more positive note, 56 percent of Republican primary voters think the Republican presidential candidates are talking about the issues that matter most to them. But among Democratic primary voters, this percentage rises to 78 percent.

Support for the Eventual Nominee

More than three in four Republican primary voters expect Donald Trump to win the nomination, including two out of three primary voters who are supporting either Ted Cruz or John Kasich.

Majorities of Republican primary voters think all three remaining candidates are honest, share their values, and have strong qualities of leadership. Donald Trump (76 percent) is seen overall as the strongest leader, while John Kasich (70 percent) is seen as the most honest and trustworthy.

Most voters -- and seven in 10 Republicans -- think government is doing too many things better left to businesses and individuals, while most Democrats think the government should do more. Independents side with Republicans on this measure.

A large majority of Americans continues to harbor distrust of the federal government: seven in 10 voters trust the government in Washington to do what is right only some of the time. Distrust in Washington cuts across party lines, though it is highest among Republicans.

This poll was conducted by telephone March 17-20, 2016 among a random sample of 1,252 adults nationwide, including 1,058 registered voters and 362 registered voters likely to vote in a Republican primary. Data collection was conducted on behalf of CBS News and the New York Times by SSRS of Media, PA. Phone numbers were dialed from samples of both standard land-line and cell phones.

The poll employed a random digit dial methodology. For the landline sample, a respondent was randomly selected from all adults in the household. For the cell sample, interviews were conducted with the person who answered the phone.

Interviews were conducted in English and Spanish using live interviewers.

The error due to sampling for results based on the entire sample could be plus or minus three percentage points. The margin of error for the sample of 362 Republican primary voters could be plus or minus six percentage points. The error for other subgroups may be higher and is available by request. The margin of error includes the effects of standard weighting procedures which enlarge sampling error slightly.