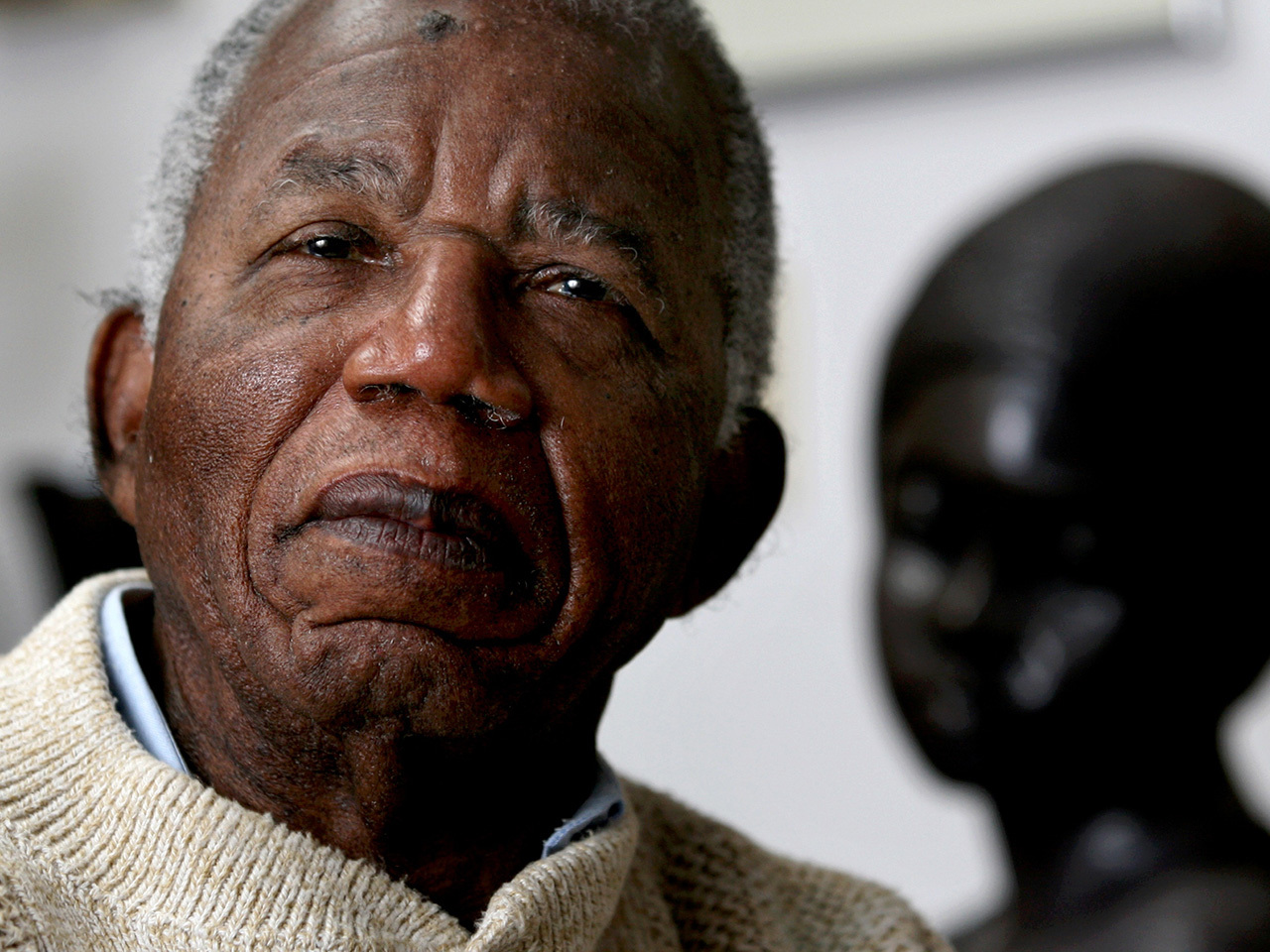 "He was also a beloved husband, father, uncle and grandfather, whose wisdom and courage are an inspiration to all who knew him," Wylie said.

For decades, Achebe penned novels, stories and essays to rewrite and reclaim the history of his native country.

His eminence worldwide was rivaled only by Gabriel Garcia Marquez, Toni Morrison and a handful of others. Achebe was a moral and literary model for countless Africans and a profound influence on such American writers as Morrison, Ha Jin and Junot Diaz.

As a Nigerian, Achebe lived through and helped define revolutionary change in his country, from independence to dictatorship to the disastrous war between Nigeria and the breakaway country of Biafra in the late 1960s. He knew both the prestige of serving on government commissions and the fear of being declared an enemy of the state. He spent much of his adult life in the United States, but never stopped calling for democracy in Nigeria or resisting literary honors from a government he refused to accept. "

His public life began in his mid-20s. He was a resident of London when he completed his handwritten manuscript for "Things Fall Apart," a short novel about a Nigerian tribesman's downfall at the hands of British colonialists.

Turned down by several publishers, the book was finally accepted by Heinemann and released in 1958 with a first printing of 2,000. Its initial review in The New York Times ran less than 500 words, but the novel soon became among the most important books of the 20th century, a universally acknowledged starting point for postcolonial, indigenous African fiction, the prophetic union of British letters and African oral culture.

"It would be impossible to say how 'Things Fall Apart' influenced African writing," the African scholar Kwame Anthony Appiah once observed. "It would be like asking how Shakespeare influenced English writers or Pushkin influenced Russians. Achebe didn't only play the game, he invented it."

"Things Fall Apart" has sold more than 8 million copies worldwide and has been translated into more than 50 languages. Achebe also was a forceful critic of Western literature about Africa, especially Joseph Conrad's "Heart of Darkness," standard reading for millions, but in Achebe's opinion, a defining example of how even a great Western mind could reduce a foreign civilization to barbarism and menace.

"Now, I grew up among very eloquent elders. In the village, or even in the church, which my father made sure we attended, there were eloquent speakers. So if you reduce that eloquence which I encountered to eight words ... it's going to be very different," Achebe told The Associated Press in 2008. "You know that it's going to be a battle to turn it around, to say to people, `That's not the way my people respond in this situation, by unintelligible grunts, and so on; they would speak.' And it is that speech that I knew I wanted to be written down."

His first novel was intended as a trilogy and the author continued its story in "A Man of the People" and "Arrow of God." He also wrote short stories, poems, children's stories and a political satire, "The Anthills of Savannah," a 1987 release that was the last full-length fiction to come out in his lifetime. Wheelchair bound in his latter years, he would cite his physical problems and displacement from home as stifling to his imaginative powers.

Achebe never did win the Nobel Prize, which many believed he deserved, but in 2007 he did receive the Man Booker International Prize, a $120,000 honor for lifetime achievement. Achebe, paralyzed from the waist down since a 1990 auto accident, lived for years in a cottage built for him on the campus of Bard College, a leading liberal arts school north of New York City where he was a faculty member. He joined Brown University in 2009 as a professor of languages and literature.

Achebe, a native of Ogidi, Nigeria, regarded his life as a bartering between conflicting cultures. He spoke of the "two types of music" running through his mind- Ibo legends and the prose of Dickens. He was also exposed to different faiths. His father worked in a local missionary and was among the first in their village to convert to Christianity. In Achebe's memoir "There Was a Country," he wrote that his "whole artistic career was probably sparked by this tension between the Christian religion" of his parents and the "retreating, older religion" of his ancestors. He would observe the conflicts between his father and great uncle and ponder "the essence, the meaning, the worldview of both religions."

For much of his life, he had a sense that he was a person of special gifts who was part of an historic generation. Achebe was so avid a reader as a young man that his nickname was "Dictionary." At Government College, Umuahia, he read Shakespeare, Dickens, Robert Louis Stevenson and Jonathan Swift among others. He placed his name alongside an extraordinary range of alumni — government and artistic leaders from Jaja Wachukwa, a future ambassador to the United Nations; to future Nobel laureate Wole Soyinka; Achebe's future wife (and mother of their four children) Christine Okoli; and the poet Christopher Okigbo, a close friend of Achebe's who was killed during the Biafra war.

After graduating from the University College of Ibadan, in 1953, Achebe was a radio producer at the Nigerian Broadcasting Corp., then moved to London and worked at the British Broadcasting Corp. He was writing stories in college and called "Things Fall Apart" an act of "atonement" for what he says was the abandonment of traditional culture. The book's title was taken from poet William Butler Yeats' "The Second Coming," which includes the widely quoted line, "Things fall apart; the centre cannot hold."

His novel was nearly lost before ever seen by the public. When Achebe finished his manuscript, he sent it to a London typing service, which misplaced the package and left it lying in an office for months. The proposed book was received coolly by London publishers, who doubted the appeal of fiction from Africa. Finally, an educational adviser at Heinemann who had recently traveled to west Africa had a look and declared: "This is the best novel I have read since the war."

The opening sentence was as simple, declarative and revolutionary as a line out of Hemingway: "Okonkwo was well known throughout the nine villages and even beyond." Africans, Achebe had announced, had their own history, their own celebrities and reputations. In mockery of all the Western books about Africa, Achebe ended with a colonial official observing Okonkwo's fate and imagining the book he will write: "The Pacification of the Primitive Tribes of the Lower Niger." Achebe's novel was the opening of a long argument on his country's behalf.

"Literature is always badly served when an author's artistic insight yields to stereotype and malice," Achebe said during a 1998 lecture at Harvard University that cited Joyce Cary's "Mister Johnson" as a special offender. "And it becomes doubly offensive when such a work is arrogantly proferred to you as your story. Some people may wonder if, perhaps, we were not too touchy, if we were not oversensitive. We really were not."

Achebe could be just as critical of his own country. The novels "A Man of the People" and "No Longer at Ease" were stories of corruption and collapse that anticipated the Nigerian civil war of 1967-70 and the years of mismanagement that followed. He not only supported Biafra's independence, but was a government envoy and a member of a committee that was to write up the new, and short-lived country's constitution. He would flee from, then return to Nigeria many times and in 2004 refused the country's second-highest award, the Commander of the Order of the Federal Republic, in protest over conditions under President Olusegun Obasanjo.

"For some time now, I have watched events in Nigeria with alarm and dismay," he said in an open letter to the president, referring to allegations of corruption and lawlessness in Achebe's southeastern home state of Anambra.

"A small clique of renegades, openly boasting its connections in high places, seems determined to turn my homeland into a bankrupt and lawless fiefdom. ... I had a strong belief that we would outgrow our shortcomings under leaders committed to uniting our diverse peoples."

Besides his own writing, Achebe served for years as editor of Heinemann's "African Writer Series," which published works by Nadine Gordimer, Stephen Biko and others. He also edited numerous anthologies of African stories, poems and essays. In "There Was a Country," he considered the role of the modern African writer.

"What I can say is that it was clear to many of us that an indigenous African literary renaissance was overdue," he wrote. "A major objective was to challenge stereotypes, myths, and the image of ourselves and our continent, and to recast them through stories — prose, poetry, essays, and books for our children. That was my overall goal."