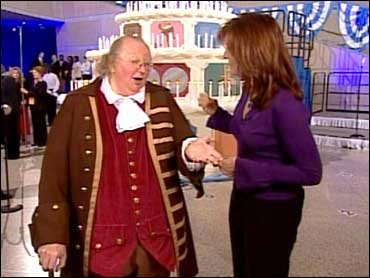 January 17, 2006, marks what would have been Benjamin Franklin's 300th birthday and Philadelphia is having a big party to honor him.

Franklin was a founding father, a statesman, an inventor, musician and entrepreneur. Tuesday morning, people representing many of his wide-ranging interests — including postmasters, politicians, police officers and printers — came together to celebrate.

Franklin was there, too, played by impersonator Ralph Archbold. He says he doesn't feel a day over 200.

About 300 people gathered at the National Constitution Center to light electric candles on an 8-foot-high, three-tiered birthday cake made mostly of wood and plastic.

The National Constitution Center is also hosting a special exhibit through April 30 called "Benjamin Franklin: In Search of a Better World."

Archbold says the center is displaying 300 artifacts, many of which have never been on display together before, including Franklin's bifocals, portraits, his own copy of the Constitution and other items loaned by his descendants.

Visitors can also see parts of the inventor's lab.

Besides the cake lighting, Philadelphia is holding a parade and other events throughout the day.

In London, Franklin's former home was unveiled as a museum.

Franklin lodged in the modest four-storey brick building in Craven Street just off London's Trafalgar Square between 1757 and 1775, acting as a diplomat on behalf of American colonists.

The house, which curators call the "first de facto US Embassy," was the site of many of Franklin's scientific experiments, including the invention of bifocal glasses and the creation of an ethereal-sounding musical instrument, the glass armonica.

Dean Shostak, one of only eight armonica players in the world, explains how the instrument works.

"It has a whole bunch of glass bowls that get larger and lower for the notes," he said. "There's a spindle that goes through the glasses mounted on cork. The fly wheel is attached to a foot pedal. I dip my hands in the water … It's more like a keyboard. The gold ones are the black keys and the clear ones are the white keys."