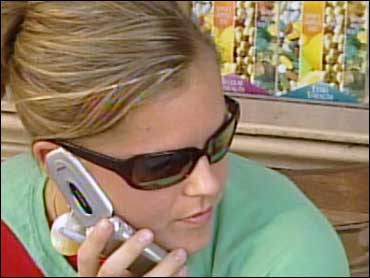 Wake up, teens: Too much time on your cell phone may be disrupting your sleep.

Heavy cell phone users are also more likely to be stressed out and generally feel tired, says Gaby Badre, MD, PhD, of Sahlgren's Academy in Gothenburg, Sweden, and the London Clinic, in England.

The findings apply to both excessive chatting on the phone and text messaging, he tells WebMD.

The study, which Badre says is the first to look at the psychosocial effects of excessive mobile phone use, was presented here at SLEEP 2008, the 22nd Annual Meeting of the Associated Professional Sleep Societies.

Are you concerned about your teen's cell phone usage? Talk with others on WebMD's Parenting: Preteens and Teenagers board.

Badre says he decided to perform the study after hearing anecdotal reports that people who spend more than an hour a day on their cell phones tend to suffer from anxiety .

The researchers studied 21 healthy teens, aged 14 to 20, with regular working or studying hours and no sleep problems.

Ten of the adolescents were light users, making or sending fewer than five calls and/or text messages a day.

Badre says he was "amazed" that only one of the teens, a light user, turned his phone off at night.

Participants were asked more than 40 questions regarding their lifestyle and sleep habits - how much they sleep, how long they sleep, how much caffeine they consume, and so on. They were also asked to rate how sleepy they felt during the day on a standardized scale.

Additionally, the teens wore a small watch-like device that records movement, "thereby giving us an objective measure of when they were awake and when they were asleep," Badre says.

The study also showed that seven of the 11 heavy users woke up after noon on the weekends, compared with only two of the 10 light users.

There was no difference in daytime sleepiness between the two groups.

Also, "much to our surprise, we didn't find any difference in mental
states - like depression or anxiety - between the two groups," Badre says.

Which Came First: Excessive Cell Phone Use or Sleep Problems?

"Teens and parents need to be aware of the risks of this kind of gadget," Badre says.

He says he's not asking teens to give up their cell phones. But "structured phone-free time slots throughout the day" may help improve sleep, he says.

"There are two different types of personalities, and the cell-phone type is on all the time," he tells WebMD.

What's not clear, though, is which comes first: the sleep disturbance or the long hours on the phone, Kothare says.

"What we need to do now is take the cell phones away from the teens who are using them most and see if their sleep improves," he says.

Badre say a larger study is planned to help to answer that question.