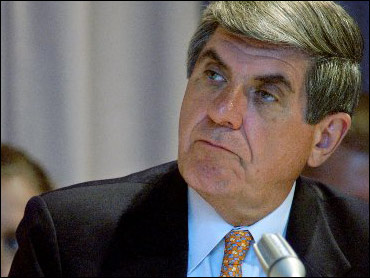 (AP)
Moderate Democratic Sen. Ben Nelson told a Nebraska newspaper on Thursday that a "government approach" to health care reform could cause the reform efforts to "implode."

The senator was talking about more than just a government-sponsored health insurance plan, or "public option," according to his spokesperson. Although, Nelson's spokesperson Jake Thompson did tell the Hotsheet that the public option passed in the House is too robust for Nelson to support.

In an interview with the Lincoln Star Journal, Nelson also said he is open to the idea of universal health care coverage "as long as it's an insurance solution rather than a political or governmental solution."

The senator's stated preference for a more incremental approach to health care reform follows a campaign from liberal activists to pressure him into supporting the public option -- the most contested "goverment solution" being offered in Congress. Nelson is one of the centrist senators whose position on the public option could make or break the proposal.

Nelson told the Star Journal he thinks there is room for consensus critical issues in health care reform, such as how to reduce costs. However, he told the paper he sees two very different potential endings to the current debate.

"One is we find areas we can agree upon and we begin to do things incrementally, taking more of an insurance approach, not a government approach," he said. "Or it implodes."

Nelson was not necessarily referring to the public option in that statement, Thompson told the Hotsheet on Friday.

"He's open to the idea of a public option as long as it doesn't seriously erode the coverage that 200 million Americans now have," Thompson said.

A common criticism of the public option is that private insurance companies may not be able to compete with it.

Though he is "open" to the idea, Thompson said Nelson is "certainly skeptical about what's been talked about in terms of a public option at this point... The robust public option that is envisioned in the House bill is not something he could support."

The senator is also open to the "trigger" plan that has gained recent attention, or to establishing nonprofit cooperatives in lieu of a public plan, Thompson said.

Along with the public option, Nelson is also wary of other elements of reform that involve governmental administration, Thompson said, such as the health insurance exchange that would be set up to give customers a "marketplace" from which to shop for different plans.

While Nelson has not been very specific about what proposals in the current health care bills he would or would not support, he has taken time to respond to the liberal pressure he's faced this summer. The senator aired his own television ad laying out his priorities for health care reform in response to the liberal ads targeting him. He did not, however, address his stance on the public option in that ad.

Nelson has made other comments recently that he wants to take a "super cautious" approach to reform, after hearing so much opposition to health care reform from residents of his state.

The senator told the Star Journal that the heated and sometimes hostile August town hall debates across the country may, in fact, have helped the legislative process.

"In a way, this may increase its chances of passage by making the plan more realistic," he said.