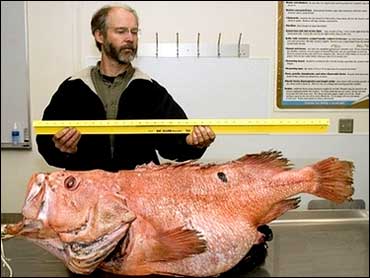 A commercial fishing boat hauled in what may have been one of the oldest creatures in Alaska — a giant rockfish estimated to be about a century old.

The 44-inch, 60-pound female shortraker rockfish was caught last month by the catcher-processor Kodiak Enterprise as it trawled for pollock 2,100 feet below the surface of the Bering Sea, south of the Pribilof Islands.

The Seattle-based vessel, owned by Trident Seafoods, pulled up an estimated 75 tons of pollock and 10 bright-orange rockfish.

Scientists at the National Oceanic and Atmospheric Administration at the Alaska Fisheries Science Center in Seattle measured, photographed and documented the fish. They removed an ear bone, the otolith, which contains growth rings similar to rings in the trunks of trees.

They estimate the rockfish was 90 to 115 years old.

That's toward the upper end of the known age limit for shortraker rockfish, said Paul Spencer of the science center. Other estimates put the fish's maximum age at 157 years, Spencer said.

The contents of the rockfish's stomach were examined and scientists took tissue samples to measure her reproductive potential. "The belly was large," Spencer said. "The ovaries were full of developing embryos."

Scientists said the specimen is not the biggest on record. A 47-inch shortraker rockfish was recorded, according to the book "Fishes of Alaska."