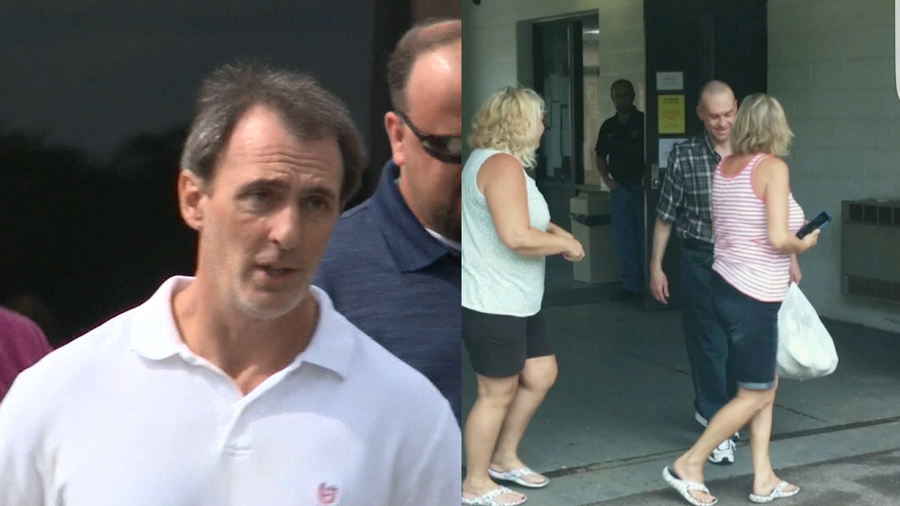 BRANDENBURG, Ky. -- A Kentucky judge dismissed murder charges Monday against two men for a 1990s killing that authorities at the time described as "satanic." The conviction had rested in part on the visual comparison of a single strand of hair that defense attorneys fought to have tested for 18 years.

Garr Keith Hardin and Jeffrey Dewayne Clark had their convictions in Meade County vacated in 2016 based on the DNA testing, as well as evidence of police misconduct. They were released from prison in August of that year after serving more than 20 years, but it wasn't until Feb. 8 that the state Attorney General moved to dismiss the charges against them.

Hardin and Clark were convicted in 1995 of killing 19-year-old Rhonda Sue Warford, and sentenced to life in prison.

On Monday, Meade County Circuit Judge Bruce Butler dismissed the 1992 murder indictments against the men at the urging of the state attorney general's office.

"The struggle for justice has been long and painful for Mr. Hardin and Mr. Clark, who served more than 20 years and whom the Commonwealth twice threatened with the death penalty for a crime they did not commit," said Seema Saifee, a staff attorney with the Innocence Project. The group is representing Hardin.

The Innocence Project fought for years to have the evidence tested for DNA, and the Kentucky Supreme Court granted the request in 2013. The testing revealed the hair didn't come from Hardin.

Judge Butler overturned their conviction in 2016, finding it "based on suppositions that we now know to be fundamentally false."

The Kentucky Attorney General's office, which took over the case last year, has pledged to re-investigate Warford's killing.

At Hardin and Clark's murder trial in 1995, prosecutors claimed they committed the killings as part of a satanic sacrifice, according to a release Monday from The Innocence Project. According to court records, Warford was dating Hardin at the time of the murder; it was Hardin's mother who told police that she believed that Rhonda, her sister, and the two men were "involved in Satanism."

The physical evidence linking the two men to the murder was a single fingerprint matching the victim's, lifted from Clark's car, and one hair described as "similar to Hardin's," found on Warford's sweatpants.

To support their theory of satanic ritual murder, the prosecutors presented a bloody cloth and broken glass recovered from Hardin's home that they said was stained during an animal sacrifice. They said the glass was a "chalice" from which Hardin drank the blood of animals.

Hardin testified at trial that the blood on the cloth was his own, caused by cutting himself on the glass, which was later supported by DNA testing.

Louisville Metro Police Detective Mark Handy, who testified at the trial, said Hardin told him that he killed animals as a form of satanic ritual and "got tired of looking at animals and began to want to do human sacrifices." Hardin denied making those statements.

Concerning the fateful strand of hair, the Commonwealth tried to argue that its expert didn't mean that it "matched" Hardin's hair with complete certainty-- but in its 2017 decision to vacate, the Kentucky Supreme Court wrote that "it is clear from the record that the hair evidence was the only thing placing Appellees at the scene of the crime."

"It stretches the limit of our imagination to say it was an abuse of discretion," the ruling said.

As for Detective Handy, the court found that he had falsely testified under oath in another unrelated murder case, resulting in a wrongful conviction that was later overturned due to newly discovered forensic evidence.