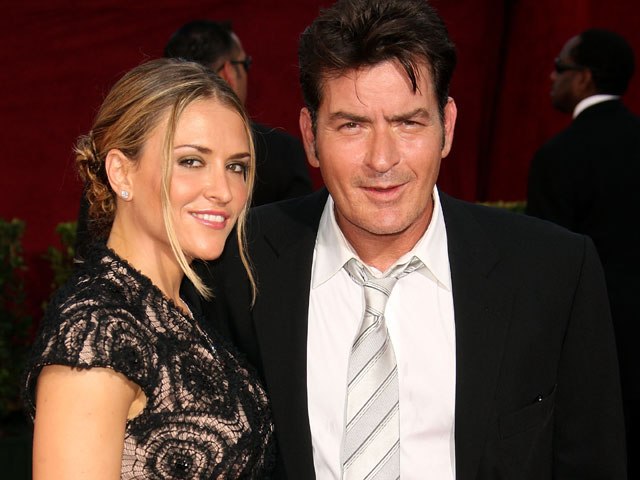 (CBS) Charlie Sheen's estranged wife, Brooke Mueller, has moved back in with him - but the living situation is just temporary.

Muller's mother, Moira Fiore, said Thursday that the move was for the sake of the couple's twin sons, Bob and Max, who are almost 2.

"Brooke and the twins have moved into Charlie's house for a week before they move into the new house that Charlie bought her down the street from him," she told People magazine. "Brooke and Charlie are friends and there is no romantic interest on Brooke's part."

Fiore added, "Brooke took Charlie's offer on moving closer because it is easier for him to see the kids."

A source close to Sheen told the magazine that he is "looking forward to having his kids close by."

The "Two and a Half Men" star and Mueller filed divorce petitions in November, citing Christmas Day 2009 as the day of their breakup. Charlie Sheen was arrested in Aspen, Colo., that day on suspicion of domestic violence against Mueller. He later resolved the case and spent 30 days on probation.

Sheen plans to return to the set of "Two and a Half Men" Tuesday. Production will begin the day before, with taping set to resume March 4, series producer Warner Bros. Television said Thursday.

The CBS comedy went on hiatus last month after Sheen sought rehab. Four episodes are expected to be completed for this season, four short of the 24 episodes that were planned, the studio said.