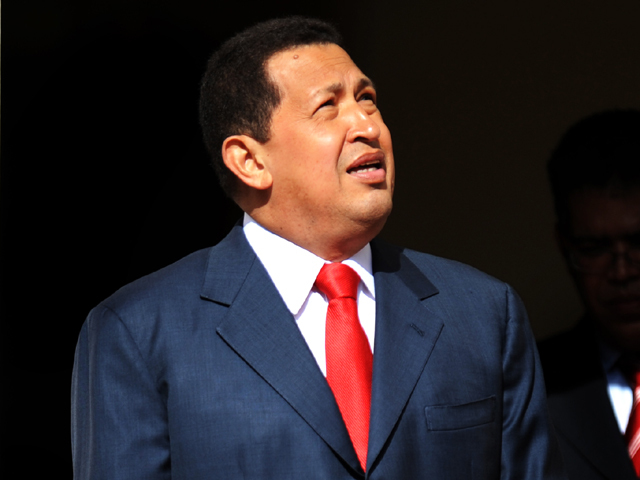 CARACAS, Venezuela - Venezuelan President Hugo Chavez is using Twitter as a tool to govern remotely while he undergoes cancer treatment in Cuba.

In about 50 messages this week on his "chavezcandanga" account (in Spanish), he has approved money for a Caracas trash collection project, praised plans for a new park and cheered on the national soccer team.

Chavez hasn't mentioned anything about his chemotherapy but has alluded to his personal battle time and again, as he did in one tweet to a supporter on Tuesday: "We're moving along here, brother! With God and the Virgin!"

Most of his messages have had the tone of a patriotic father figure connecting with his public. Chavez boasts more than 1.8 million followers, and his messages also regularly pop up on the screen on state television in Venezuela.

A leader who knows well how to choose his sound bites, Chavez has used Twitter to remain in the news at home even as he is out of pocket and not making his usual appearances on television.

He did just that Thursday morning in a flurry of messages when he complained about a referee's call during Venezuela's soccer match against Paraguay at the Copa America tournament in Argentina. Chavez said he had been watching alongside Fidel Castro, and they both agreed it was a bad call.

"In my modest opinion... THEY ROBBED US OF THE VICTORY GOAL! And I hope that with this I'm not offending anybody!" one of the messages said.

Chavez then turned to plans to create a park named after Simon Bolivar in a portion of a military airfield: "Bolivar Park is a true gift of the Bolivarian Revolution for our beautiful Caracas!!"

Seven hours later, Chavez was back saying he had met with Fidel and Raul Castro, along with Ecuador's president, Rafael Correa. "What a beautiful meeting we've had this afternoon," the message said, adding they finished by singing the Venezuelan song "Alma Llanera."

A photo of their meeting appeared in state media, while the president's Twitter account early Friday offered an update for supporters: "Good morning, Living World! ... And this Will to Live, what it does is grow inside me!"

His account has also started circulating a hashtag slogan "ViviremosYVenceremos," or "We will live and be victorious," which has become a sort of meeting place for Chavistas to chat and post get-well messages.

Chavez has said he has a team of aides of who help manage his presence on Twitter, including tracking messages from people who write to him with various requests for help. Yet the tweets are presented, regardless of who may be typing them into the box, as coming directly from Chavez.

In other messages this week, he greeted Cabinet ministers and touted a public housing construction program. He said he had approved the equivalent of more than $25 million for a new trash-collection company in Caracas, $51 million for a state government and $37 million for the organization Frente Francisco de Miranda, which promotes efforts to transform Venezuela into a socialist state.

Turning to international affairs, Chavez directed a message to Mexican leader Felipe Calderon, saying: "Hey President Calderon, my friend, I thank you for your good wishes."

The 56-year-old Chavez underwent surgery in Cuba on June 20 to remove a cancerous tumor. He hasn't said what type of cancer has been diagnosed or specified where exactly it was located, saying only that it was in his pelvic region. He says chemotherapy is necessary to ensure cancer cells don't reappear.

On Twitter, his only references to his treatment have been vague and filled with optimistic slogans.

As he signed off one night, the message read: "From here, closing another day of this Battle for Life."