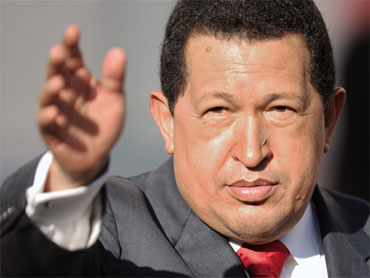 Venezuelan President Hugo Chavez on Sunday went through with his threat to reject the diplomat nominated by President Obama to be the U.S. ambassador to Caracas.

Chavez said he won't accept Larry Palmer as envoy because he recently suggested morale is low in Venezuela's military and raised concerns about Colombian rebels finding refuge in Venezuela.

The socialist leader had said Thursday that he probably would refuse Palmer's ambassadorship, which has not yet been confirmed by the U.S. Senate.

Spokesmen for the White House and State Department did not immediately respond to phone calls seeking comment on Chavez's announcement.

"Obama, how do you expect me to accept this gentleman as ambassador?" Chavez said.

"He disqualified himself, he cannot come as ambassador," he added.

As part of his Senate confirmation process, Palmer said last month that "morale is reported to be considerably low" in Venezuela's military because of politically motivated appointments.

Palmer also mentioned Colombia's accusations that Chavez has ignored the presence of Colombian rebel camps inside Venezuela, saying Chavez has an obligation to investigate. Chavez denies he gives haven to the rebels and he severed diplomatic relations with Colombia on July 22 over the allegations.

Palmer, who has served as ambassador in Honduras and charge d'affaires in Ecuador, was tapped by Obama's administration to try to manage Washington's difficult relationship with Venezuela.

U.S. officials have long been critical of Chavez, but ambassadors assigned to Caracas have rarely taken such strong stances in public.

The Senate has yet to confirm Palmer. It has been expected to take up the matter once senators return from a summer break Sept. 7.

Palmer was picked to replace Patrick Duddy, who recently ended his assignment in Venezuela

Chavez had stormy relations with President George W. Bush, accusing the U.S. leader of plotting to oust him and once likening Bush to the devil.

Chavez had expressed optimism that ties between Venezuela and the U.S. would improve when Obama took office, but relations have remained tense. Chavez says the Obama administration has continued to conspire against his government, while U.S. officials voice concerns about Chavez's policies being a threat to press freedom and Venezuela's democracy.