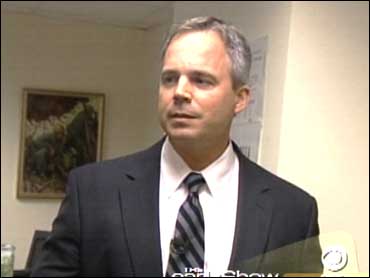 Robert Hogue cheated death on 9/11 when a plane struck the Pentagon and killed 184 people.

Hogue, counsel for the commandant, United States Marine Corps, was in his office on the outer ring of the Pentagon — American Airlines Flight 77 plowed into the building and erupted in a ball of flame directly underneath his office.

"I don't know anybody who got physically closer to the plane and lived," he told CBS News Pentagon correspondent David Martin

"It comes in right under this window," he showed Martin. "This is the fourth floor. The plane takes out all of one and two, and part of three. All the supporting structure, all the pilings, all the steel, everything under us is gone, and everybody under us died."

The building has been rebuilt and his office put back exactly the way it was, but Hogue's office will never be the same.

Like everyone else, Hogue had been staring in disbelief at televised pictures of the World Trade Center, and he wondered if the Pentagon would be next. Just seconds before the plane struck, he stepped into the outer office to ask if any special security precautions had been ordered. They hadn't.

"I get right about here and the plane hits," he said as he walked Martin through his steps. "These floors heave up. The building breaks away right there. When you see photographs of this building, when you look at them you will see there is a very clean break on the left side of the photo."

That expansion joint was the dividing line between life and death. Hogue was standing on the death side.

"This side of the expansion joint heaves up like a diving board and the building tears away right here and I go flying through here and tumble down right about here," he said.

He landed on the life side, picked himself up and headed toward the door, but it was jammed. A Marine corporal started pulling on it for all he was worth.

"I mean, five minutes pulling on it seemed like an eternity and this place is filling up with smoke and the floor is pulling away," he said. "You could still smell the jet fuel. I mean it was like a fine, white mist, it was kind of hanging in the air. I was standing outside here, and I remember so well the scene and the flames, and I remember thinking to myself — and I think I even said it on the air — that the chances of anybody in there surviving are very, very low."

Finally, the door opened and Hogue and three others stumbled into a hallway, which was rapidly filling with thick black smoke.

"I've said just plain dumb luck," Hogue said. "One of the most unsettling features of all of this is just the sheer randomness of it.

Hogue and the other people he was with decided that that they had to stay — although Hogue said his instincts told him to flee — and try to find other survivors. They found one other person but couldn't tell which direction held the best hope for escape.

"So we kind of gather here and say, 'Well, OK, we gotta make this choice. What are we going to do?' And right then some guy starts yelling from the doorway 'Come this way. Come this way.' Some naval officer — God bless him," said Hogue, who still has no idea who that officer was.

Through it all, the Marine Corps flag remained standing. After the fire was put out, the Marines retrieved it from the rubble. But Hogue's office had collapsed into the flaming pit. All that was ever found were two charred name tags. When he went home that day, Hogue knew he still held on to what was most precious.

"My daughter rushes up to see me ... that's when you know it's nice to be alive," he said through tears.