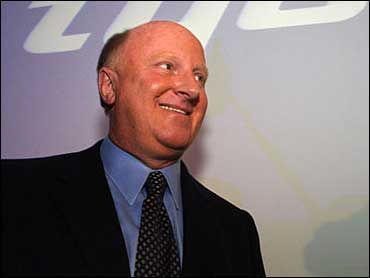 Every once in a while, I like to update you on recent news items you may have missed or ones that were not covered thoroughly enough. So, here is the News in Brief:

Popular Guy Department: Saddam Hussein surprised nobody by winning re-election for another term as president of Iraq. He was the only candidate on the ballot. Worldwide, the election was pretty much considered a sham — despite the fact that the votes were not counted in Florida.

Amicable Divorce Department:Couples can still get along after their marriages are over. Proving this, former Tyco CEO Dennis Kozlowski was bailed out of jail when his ex-wife came up with $10 million in cash. However, she didn't come up with the money immediately, possibly because the $10 million was in her other purse.

P.U. Department: Some citizens of New Orleans were outraged when a survey declared their city only the third sweatiest city in America, behind "winner" San Antonio, and second place Dallas. Despite their outrage, nobody volunteered to conduct a recount.

Healthy But Unusual Punishment Department: Convicts were upset recently when some prisons banned smoking. There has been no confirmation that prisons will now be divided into three sections: maximum security, smoking, and non-smoking.

Happy Anniversary Department: Scott Fahlman invented the online smiley face twenty years ago. You've all seen it. It's :). It spawned a slew of "emoticons" or symbols that are online shorthand versions of emotions. Not to toot my own horn, but 19 years, 11 months ago, I was the first person who invented the emoticon that reads like this: "Stop sending me those annoying symbols!"

Don't Let The Dog Chew On It Department: Ed Headrick, the inventor of the frisbee passed away recently. His family has said that they will grant his wish for his remains to be molded into frisbees. Before he died, he said he'd like nothing more than for one of "his" frisbees to get stuck on somebody's roof.

Swimsuits And World Peace Department: Oxana Fedorova was dethroned as Miss Universe because she found herself too busy to carry out all the duties that go along with the crown. I guess waving can get really tiring.

A Candidate Of A Different Color Department: In 1999, Stan Jones, Montana's Libertarian candidate for the Senate, began drinking a silver solution that he believed would protect him from disease in case the anticipated Y2K calamity led to a shortage of antibiotics. Unfortunately, a side effect of this is that it turned his skin blue. Although the condition is not considered serious, it is permanent. So, this year if Montanans don't feel like voting for the Green Party candidate, they have another choice.

One Giant Punch For Mankind Department: When former astronaut Buzz Aldrin was harassed by Bart Winfield, who claimed that the Apollo 11 astronauts faked their 1969 trip to the Moon, Buzz punched the guy. Winfield is adamant that the trip to the Moon never took place. He contends that the astronauts are liars and fakers who just want publicity. He ought to know.

Sticky Medicine Department: A study reported in the Archives of Pediatrics and Adolescents Medicine revealed that the best treatment for warts might be duct tape. Patients wore duct tape over their warts for six days, and then they removed the tape and soaked the area in water, then used an emery board or pumice stone to scrape the spot. This treatment is now thought to be more effective and less painful than the often recommended liquid nitrogen method. Because of the success of the duct tape treatment, doctors will probably try to use the tape for other medical issues. I wonder if duct tape will now be placed over people's mouths to cure obesity.

Too Loud Department: The latest noisemakers for sports fans are called "ThunderStix" or "CheerStix." They are plastic inflatable things that fans bang against each other. They're big at the American League Champion Anaheim Angels' Edison Field. However, some people, including officials of the Pacific 10 Athletic Conference, think they're too loud, and have banned them. Proponents of the noisy "stix" think it's absurd to curb home field noise. It's probably un-American. The "stix," by the way, are made in Beijing, China.

Political Dreams Department: North Carolina Republican Senatorial candidate Elizabeth Dole revealed that it is her "secret desire to guest star on 'Law & Order.'" There is no substantiated evidence that it is former President Bill Clinton's secret desire to appear on "Blind Date."

Treading Water Department: A Florida man recently survived being lost at sea for 11 weeks. He is expected to recover fully. Obviously, he was not on a cruise with his family.