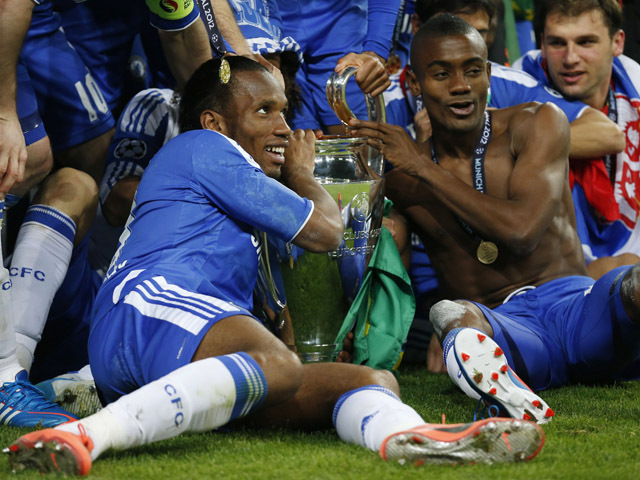 The charismatic striker in twas at the heart of Chelsea's unlikely comeback victory in the Champions League final against Bayern Munich on Saturday night, scoring the tying goal in the 88th minute and the winner on the final penalty kick of the 4-3 shootout.

With two minutes to go and Chelsea down 1-0 to the German team in its home stadium, Drogba soared high from a corner to head home the equalizer and force 30 minutes of extra time, which ended 1-1.

When it was still level after four penalty kicks each, the 34-year-old from Ivory Coast who makes a habit of scoring crucial goals did so again, sliding home the winner and giving Chelsea its first Champions League title.

Chelsea's remarkable Champions League season has played out with the intensity of an opera since losing 3-1 to Napoli in a last 16, first-leg match in February.

The club's Russian owner Roman Abramovich — whose craving for a Champions League title since 2003 is routinely described as a holy grail — soon responded by firing coach Andre Villas-Boas and promoting assistant Roberto di Matteo, albeit with just an interim tag.

Di Matteo responded by masterminding a stirring comeback against Napoli, defeat of Benfica and the epic rearguard action to eliminate Barcelona in the semifinals.

"The way we turned things around against Napoli, Barcelona, I think we deserve this trophy," Drogba said. "The last kick of the season and what a way to do it now."

Abramovich now has the fascinating decision of whether to reward Di Matteo by entrusting his billion-dollar investment to the 41-year-old Italian on a permanent basis.

"Football, like life, is unpredictable and crazy," Di Matteo said. "Nobody could have predicted the last three months. To finish like this is incredible. Whatever the future holds for me, I'd be happy."

Abramovich might consider how the interim coach helped protect the club's business plan. Victory Saturday sealed Chelsea's last remaining route, as title holder, into next season's competition and retaining the elite status and finances that follow.

The owner, who clapped and sang along as one of the fans' anthems, "The Liquidator," pounded the Allianz Arena sound system close to midnight, must also decide what contract to offer Drogba after his current deal expires next month.

The final was billed as possibly Drogba's last match for the club after eight years of exceptional service in west London.

"We can't take decisions on moments like this, on emotions," he said.

As against Barcelona, on Saturday Drogba led the attack alone as Chelsea was starved of possession, drew fouls where he could and came alive at the merest hint of a chance to score.

"When we have this guy in goal you have to believe," Drogba said.

Cech, who was exceptional in Barcelona, saved Robben's powerful 21st-minute shot, deflecting the ball on to his right post and handled perfectly when any Bayern effort breached the wall of defensive bodies in front of him that has been a trademark of Chelsea's campaign.

"They played the way they can at the moment. They fought, they played well defensively. They deserved it," Bayern coach Jupp Heynckes said.

When Bayern led 3-2 in the shootout, after Juan Mata's opening kick was saved by German goalkeeper Manuel Neuer, Cech dived to his left to palm away substitute Ivica Olic's attempt.

After Ashley Cole, who also had an excellent match, leveled the shootout, Bayern's star player, Bastian Schweinsteiger stepped up.

Schweinsteiger had scored the winning goal in the semifinals shootout against Real Madrid — extending the club's run of never losing on penalties in European competition — but pushed his shot on to the left post, then covered his face with his shirt.

Drogba stepped up, placed his kick in the bottom right corner as Neuer dived left, and wheeled away to hug Cech and await the adulation of their onrushing teammates.

He succeeded where his captain John Terry, who was suspended for Saturday's finale, failed in missing the fifth penalty in a shootout four years ago that allowed Manchester United to win an all-English final.

That defeat in Moscow fuelled the legend of Abramovich's craving to win, and his players' desire for redemption in probably their last shot at the trophy.

Chelsea's quest looked hopeless for much of the game, and certainly after Thomas Mueller broke dogged resistance with a header past Cech in the 83rd minute.

Mueller's goal sparked delirious celebrations among the Bayern players and fans who believed they were destined to win their home final.

They underestimated Chelsea's admirable resolve, and five minutes later Drogba soared to score with a header from Mata's corner.

Yet Drogba's taste for the dramatic flared up in the third minute of extra time, as he clipped Franck Ribery's heels in the penalty area, ending the Frenchman's night through injury.

Referee Pedro Proenca's decision to point to the spot seemed to stun the Bayern fans, and their anxiety was well founded.

Robben fired low to Cech's left, and the Czech `keeper blocked with his arm and body, then reached across to collect the loose ball.

Bayern came agonizingly close in the 108th, when substitute Olic slipped the ball across the goalmouth but teammate Daniel van Buyten failed to anticipate the simple tap-in.

But Chelsea would not be denied, as Drogba recalled the Moscow heartbreak, and four other semifinal defeats.

"Always so close and so far, and today the cup is going to Stamford Bridge, and this is the best ever," Drogba said.