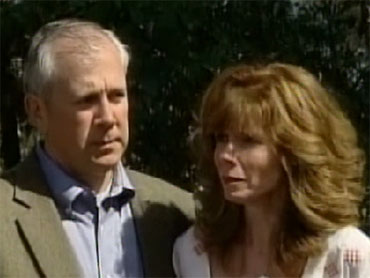 The parents of a 17-year-old girl who was killed after vanishing in a park began campaigning Tuesday for a law that aims to strengthen oversight of child sex predators.

Brent and Kelly King said in an interview they will begin their effort in Sacramento by backing a state bill being called Chelsea's Law in honor of their daughter.

Brent King said, "If our laws were smarter and bolder, Chelsea might still be here."

The bill is expected to be introduced next month in the state Legislature.

The Kings also want to see changes in federal law. If that fails, they intend to work state-by-state for heightened electronic monitoring and other measures targeting sex offenders such, as the one charged with the murder of their daughter.

Kelly King told reporters recently, "I promise to do all I can to protect other daughters and other mothers from this incomprehensible nightmare I'm walking through."

The campaign comes less than a month after Chelsea King failed to return from a run in a San Diego park, and her body was found near a lake.

John Albert Gardner III, a convicted child molester, has pleaded not guilty to murdering Chelsea and attempting to assault another woman in December.

CBS News correspondent Ben Tracy reported on "The Early Show" Gardner, 30, was convicted 10 years ago of sexually assaulting a young girl. After getting out of prison, Gardner was also cited for several drug and driving offenses.

Gardner is also a suspect but has not been charged in the death of a 14-year-old Amber Dubois, who disappeared walking to school last year.

The Kings said they were educating themselves about the legal system while staying focused on their priority of raising Tyler King, Chelsea's younger brother.

"We're still in the very infancy of trying to even breathe in the morning," Brent King said.

They have met for hours with Assemblyman Nathan Fletcher, a San Diego Republican who intends to introduce Chelsea's Law.

Fletcher appeared Tuesday with the Kings at a news conference and spoke only in broad outlines about the proposed legislation. He said it would include "an effective one-strike provision" to send predators to jail, changes to the parole system and closer monitoring of sex offenders.

Fletcher said he was also considering the possibility of lifetime parole with GPS monitoring for sex offenders and having parole violators go before the Board of Parole instead of lower-level corrections officials.

Gardner, he noted, repeatedly violated parole and was never sent back to prison. Records showed one violation involved living too close to a daycare center, while others were issued for letting the battery on his ankle bracelet run low and missing a meeting with his parole officer.

Gardner served five years of a six-year sentence for molesting a 13-year-old neighbor in San Diego in 2000 and was on parole for three years, until September 2008.

"The unfortunate reality is this case has exposed a broken system," Fletcher said.

Brent King said he can't bear to read about Gardner's history and has been infuriated by the news stories he has seen.

Since the death of their daughter, the Kings have put their careers on hold. Brent King worked for years in mortgage banking. Kelly King is a medical assistant in a dermatologist's office.

"We are parents first, activists second, then everything else will sort itself out after that," Brent King said.

The couple has been relying on a tight circle of friends and family for advice and support. The have formed a nonprofit group, Chelsea's Light Foundation, to promote legislative and educational initiatives to protect children from sexual predators.

"It feels like one terrible day that never ends," he said.

Kelly King said she has been sleeping only when her body won't allow her to stay awake.

Meanwhile, Gov. Arnold Schwarzenegger asked an expert panel to investigate why Gardner wasn't classified as a high-risk sex offender or sexually violent predator before he was released from prison.

The California Sex Offender Management Board should also review whether Gardner's parole should have been revoked for violations including living too close to the daycare center, Schwarzenegger said in a letter to the board.

He asked the board, made up of law enforcement, victims and treatment providers, to recommend ways to better monitor sex offenders.

Schwarzenegger asked the board to review the Gardner case earlier this month. He expanded on the request in Tuesday's letter.