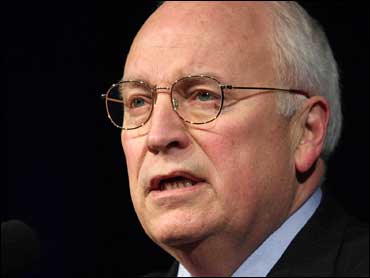 Vice President Dick Cheney says he's guessing that al Qaeda leader Osama bin Laden is still alive, and that capturing him is something the Bush administration "clearly would love to do" in their last few weeks in office.

Bin Laden has escaped capture by the Bush administration since the Sept. 11, 2001 attacks on New York and Washington.

Cheney said he and President George W. Bush would have preferred to have gotten bin Laden right after the attacks more than seven years ago. But Cheney says the U.S. has made progress in undermining the al Qaeda network.

Speaking in an interview broadcast on "Fox News Sunday," the vice president also blamed Congress for failing to bail out the auto industry, saying the White House was forced to step in to save U.S. car companies.

Cheney said the economy is in such bad shape that the car companies might not have survived without the $17.4 billion in emergency loans that President Bush approved on Friday.

"The president decided specifically that he wanted to try to deal with it and not preside over the collapse of the automobile industry just as he goes out of office," Cheney said.

Lawmakers "had ample opportunity to deal with this issue and they failed," Cheney said. "The president had no choice but to step in."

Congress rejected an auto bailout package after many Republicans and some Democrats opposed it. Some said U.S. auto companies would be better off if they were required to reorganize through bankruptcy.

Cheney leaves office Jan. 20 as one of the most powerful, if unpopular, vice presidents in recent history. He played a key role in many of Mr. Bush's major policy decisions and, in the interview, was unapologetic in his review of the past eight years.

He staunchly defended the Bush administration's use of executive power in the fight against terrorism, and disagreed with calls to limit presidential authority.

He also said Mr. Bush has exercised what he thinks is the legitimate authority of the president's constitutional powers as commander in chief to defend the country.

"If you think about what Abraham Lincoln did during the Civil War, what FDR did during World War II, they went far beyond anything we've done in a global war on terror," the vice president contended.

Cheney said he was unconcerned about polls showing him as unpopular, saying that people who spend too much time reading polls "shouldn't serve in these jobs."

He offered a somber assessment of the economic challenges facing the incoming Obama administration, saying there is a growing consensus that government action will be needed next year to help revive the economy. But he declined to judge the economic stimulus plan that Obama is considering because the program has yet to be announced.

Obama and his team are working to come up with details of a plan to pump up the economy with $850 billion or more in government spending over the next few years. Their goal is to create or save 3 million jobs in the next two years.

"I'd want to see what they're going to spend it on," Cheney said. "There usually are fairly significant differences between we Republicans and the Democrats on how you stimulate the economy."

Cheney, also speaking about the future of the Republican Party, the hunt for bin Laden, and the role for his successor, Joe Biden, said he: