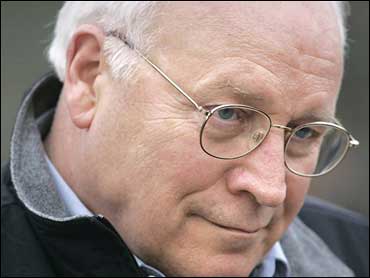 Vice President Dick Cheney on Tuesday called for "strong and robust" presidential powers, saying executive authority was eroded during the Watergate and Vietnam eras. Some lawmakers objected that President Bush's decision to spy on Americans to foil terrorists showed he was flexing more muscle than the Constitution allows.

The revelations of Mr. Bush's four-year-old order approving domestic surveillance without court warrants has spurred a fiery debate over the balance of power between the White House, Congress and the judiciary.

"I believe in a strong, robust executive authority and I think that the world we live in demands it," Cheney said.

"I would argue that the actions that we've taken there are totally appropriate and consistent with the constitutional authority of the president. ... You know, it's not an accident that we haven't been hit in four years," the vice president said, speaking with reporters on Air Force Two en route from Pakistan to Oman.

Just a year ago, Mr. Bush assured Americans that their civil liberties were being protected in the hunt for terrorists, reports CBS News chief White House correspondent John Roberts.

The White House said Tuesday that the president was only talking about wiretap provisions under the Patriot Act, reports Roberts.

On Capitol Hill, senators from both parties said the role of Congress cannot be sidelined — even in wartime.

"I think the vice president ought to reread the Constitution," said Sen. Edward Kennedy, D-Mass.

Democrats said they were deeply troubled by the surveillance program, and contended the president had no authority to approve it. "He has no legal basis for spying on Americans without court approval," said Sen. Richard Durbin of Illinois, the No. 2 Democrat in the Senate.

Republicans said Congress must investigate whether Mr. Bush was within the law to allow the super-secret National Security Agency to eavesdrop — without warrants — on international calls and e-mails of Americans and others inside the United States with suspected ties to al Qaeda.

"I believe the Congress — as a coequal branch of government — must immediately and expeditiously review the use of this practice," said Sen. Olympia Snowe, R-Maine.

Snowe joined three other members of the Senate Intelligence Committee, including Nebraska Republican Chuck Hagel, in calling for a joint inquiry by the Senate judiciary and intelligence committees.

The administration defends the program, saying Congress gave Mr. Bush the authority to use "signals intelligence" — wiretaps, for example — to eavesdrop on international calls between U.S. citizens and foreigners when one of them is a suspected al Qaeda member or supporter.

The administration insists both the Constitution and congressional authorization for the war on terror give the president the power to circumvent the courts when eavesdroping on suspected terrorists. But many scholars believe the program is illegal.

"I think their opinion is ludicrous," David Cole of Georgetown University told CBS News. "I think Congress expressly addressed whether the president could do this during war time and they said yes, but only for 15 days in an emergency situation. The president has now done it for four years."

Attorney General Alberto Gonzales cites the Authorization to Use Military Force law, which Congress passed and Mr. Bush signed a week after the Sept. 11 terrorist attacks. The administration believes that law lets the government avoid provisions of the 1978 Foreign Intelligence Surveillance Act.

The surveillance act was passed after public outcry over abuses during the Nixon administration, which spied on anti-war and civil rights protesters. Under the act, known as FISA, an 11-member court oversees government applications for secret surveillance or searches of foreigners and U.S. citizens suspected of terrorism or espionage.

"I'm not a lawyer, but in my reading, it is pretty conclusive, very conclusive, that FISA prohibits all warrantless electronic surveillance of Americans in America," said Sen. Dianne Feinstein, D-Calif.

Sen. Joe Lieberman, D-Conn., asked: "Why didn't the administration feel that it could go to the FISA court to get the warrant?"

Rep. John Conyers of Michigan, the top Democrat on the House Judiciary Committee, introduced a bill calling on Congress to determine whether there are grounds for impeachment — an event that is extremely unlikely in a Republican-controlled Congress.

Mr. Bush and his top advisers have suggested senior congressional leaders vetted the program in more than a dozen highly classified briefings. Democrats said they were told of the program, but had concerns.

West Virginia Sen. Jay Rockefeller, the Senate Intelligence Committee's top Democrat, on Monday released a letter he wrote to Cheney in July 2003 that, given the program's secrecy, he was "unable to fully evaluate, much less endorse these activities."

Senate Intelligence Committee Chairman Pat Roberts, R-Kan., pushed back Tuesday, saying that if Rockefeller had concerns about the program, he could have used the tools he has to wield influence, such as requesting committee or legislative action. "Feigning helplessness is not one of those tools," Roberts said.

Homeland Security Secretary Michael Chertoff, who headed the Justice Department's criminal division when the monitoring program was in its infancy, rejected suggestions it is tantamount to a police state. "We'd be remiss if we didn't use all of the legal means available to defend ourselves," he said Tuesday on Fox News.

He said the White House has helped protect presidential power by fighting to keep secret the list of people who were a part of his 2001 energy task force. The task force's activities attracted complaints from environmentalists, who said they were shut out of discussions on developing a national energy policy while corporate interests were present.

"That issue was litigated all the way up to the Supreme Court and we won," Cheney said.