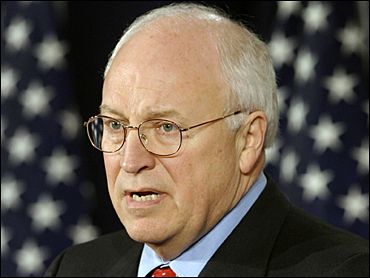 Vice President Dick Cheney warned Democrats Friday that he will cast the tie-breaking vote to ban filibusters of President Bush's judicial nominees if the Senate deadlocks on the question.

Republicans are moving the Senate toward a final confrontation with Democrats over judicial nominations. Internal GOP polling shows that most Americans don't support Senate Majority Leader Bill Frist's plan to ban judicial filibusters — a tactic in which opponents can prevent a vote on a nomination with just 41 votes in the 100-member Senate.

"There is no justification for allowing the blocking of nominees who are well qualified and broadly supported," Cheney told the Republican National Lawyers Association. "The tactics of the last few years, I believe, are inexcusable."

"Let me emphasize, the decision about how to proceed will be made by the Republican leadership in the Senate," Cheney said. "But if the Senate majority decides to move forward and if the issue is presented to me in my elected office as president of the Senate and presiding officer, I will support bringing those nominations to the floor for an up or down vote."

Sen. Charles Schumer, D-N.Y., said the White House "has stepped over the line by interfering with the Senate to reduce checks and balances."

"The White House has always wanted to reduce the Senate's power and the fact that Vice President Cheney is encouraging this abuse of power should strengthen the Senate's resolve to resist," Schumer said.

Now that Texas judge Priscilla Owen and California judge Janice Rogers Brown have been approved by the Senate Judiciary Committee, Frist has two nominees to push forward in a battle that conservatives hope their allies will rally around.

"We have now the vehicle. We have two qualified women. They have met every test," said Sen. Kay Bailey Hutchison, R-Texas.

An internal Republican poll showed that Frist's plan to ban judicial filibusters might not be as popular as they had hoped.

Frist, strongly backed by conservatives in and out of the Senate, has threatened to employ a parliamentary tactic — requiring only a majority vote — to change Senate practices on judicial filibusters. Republicans hold 55 seats in the 100-member Senate, and Cheney would be available to break a tie if necessary.

Democratic leader Harry Reid of Nevada commands a solid block of 45 votes against the proposal, and Republican Sens. John McCain of Arizona and Lincoln Chafee of Rhode Island have publicly stated their opposition as well. A few GOP lawmakers are uncommitted, and Reid said this week that if Frist calls a vote, "it's going to be very close."

Several officials who attended the polling briefing said the survey also contained encouraging news for Republicans. The poll found more than 80 percent of those surveyed believed all judicial nominees deserve a yes-or-no vote.

The officials spoke on condition of anonymity, noting the survey data has not been made public.

Republicans say negative polling numbers wouldn't deter them. "Polling on this issue is not going to make a difference. We are going to try to do what's right," Hutchison said.

GOP Conference chairman Rick Santorum of Pennsylvania said he was just as strongly behind the plan to push through Mr. Bush's nominees, despite a report that he was urging Republicans to slow down. "As far as the timing, that's up to the majority leader," he said.

Republicans want a resolution before a vacancy occurs on the Supreme Court because they worry that having to get support from 60 senators would affect who Mr. Bush picks for that seat. Chief Justice William Rehnquist, 80, is fighting thyroid cancer.

One judicial nominee, Idaho lawyer William Myers, already is waiting for a confirmation vote on the Senate floor. But conservatives would rather see the final showdown come over Brown, Owen or U.S. Appeals Judge William Pryor, who was given a temporary appointment by Mr. Bush after he was blocked by Democrats.

Conservatives during the last Congress accused Democrats of acting out of racial, religious and gender prejudice in blocking Brown, Owen and Pryor. Brown is black, and Pryor is a Catholic.

The Family Research Council, a conservative organization, has arranged a rally for this weekend in Tennessee to build support for the GOP plan. It accuses Democrats of waging filibusters based on faith. Frist is scheduled to appear by videotape.

Democrats have condemned those attacks and countered that their opposition is based solely on the conservative views of the nominees.

Republicans defended Owen and Brown, saying they were fine judges and that Democrats broke with Senate tradition by threatening to filibuster their nominations.