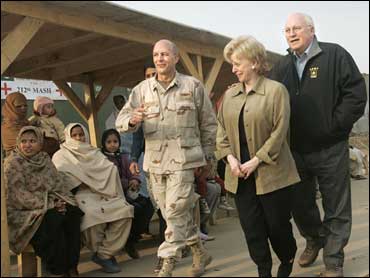 Vice President Dick Cheney decided Tuesday to cut short a tour of the Middle East to return to the United States to take part in critical session-ending business in the Senate, an aide said.

"The vice president is returning to Washington to be on hand in the Senate to fulfill his constitutional duties as president of the Senate and cast tie-breaking votes, if necessary," spokesman Steve Schmidt told reporters accompanying Cheney on his overseas trip.

Presiding over the Senate is among Cheney's constitutional duties, although vice presidents rarely attended most sessions, and can only vote to break ties.

White House Spokesman Scott McClellan told CBS News correspondent Peter Maer that the decision to cut short Cheney's Middle East trip reflects administration concerns about a potentially close Senate vote on the deficit reduction package. Cheney would be the tie breaker if the Senate splits on provisions of the measure. A vote is expected Wednesday.

Cheney had been scheduled to visit Middle Eastern allies Saudi Arabia and Egypt on Wednesday.

Earlier Tuesday, Cheney visited Pakistan's earthquake zone Tuesday, underscoring the idea that helping Muslims in times of tragedy is one of the best ways the United States can improve its image overseas.

"It's been an amazing experience to see the extent of the devastation," Cheney said during a visit to a field hospital being run by the U.S. military near the quake's epicenter in the mountainous area 65 miles northwest of the capital Islamabad.

"I'm also obviously tremendously impressed with what we've been able to do with our MASH units," the vice president said in one of the dozen medical tents in the complex. "U.S. forces were able to move quickly into the area. We were here within 48 hours and we've been here ever since."

Indeed, personnel running the facility told Cheney that while the center initially was set up for earthquake relief, more than 70 percent of the people now being seen come from miles around for treatment of a variety of medical problems not directly related to the earthquake.

About 30 Pakistanis waited in line for treatment, sitting huddled in blanked against a chilly overcast under a sign that said: "From the People of the USA. 212th MASH."

U.S. helicopters have been playing key role in ferrying aid to the badly damaged areas, especially to the highlands where heavy snow and rains are expected this week.

Cheney visited the key ally of Pakistan on a multi-country tour aimed also at building support for the war on terror.

Pakistani President Pervez Musharraf welcomed Cheney to the country during a meeting at the presidential palace. He thanked him for "the assistance in the relief operation in the form of helicopters especially, because I don't think we could have managed the relief operation without your support."

The magnitude-7.6 quake struck northern Pakistan and Kashmir Oct. 8, killing 87,000 people and destroying the homes of 3.5 million others. With the area's geography of high mountains and steep ravines complicating the rescue effort, many of those displaced still lack proper shelter, clothing and medical care.

"The American people wanted to express our sorrow at the tremendous tragedy that you had with the earthquake," Cheney told Musharraf. "We're delighted we've been able to be partners in helping address this. And one of the things I wanted to do today, obviously, is to have a chance to see some of our people who are involved with those relief efforts."

At the peak of initial relief efforts, the U.S. had more than 1,200 personnel and 24 helicopters in the affected areas. The American troops have flown more than 2,600 helicopter flights to deliver nearly 12 million pounds of relief supplies such as blankets and winterized tents. Army medical personnel have cared for more than 11,000 Pakistanis.

President Bush said during an appearance in Philadelphia on Dec. 12 that such aid is one way for the U.S. to improve its reputation in the Muslim world.

"The United States of America was first on the scene," Mr. Bush said. "We got a lot of kids flying choppers all around that country providing help and aid."

Mr. Bush has made $156 million available for relief and reconstruction needs and his father, former President George H.W. Bush, was appointed a special United Nations envoy for reconstruction earlier this month. More than $6 billion in aid and soft loans has been pledged internationally.

On his trip, Cheney also visited Iraq and Afghanistan to draw attention to democratic progress in those countries at a time when a majority of Americans say they disapprove of President Bush's handling of the war.