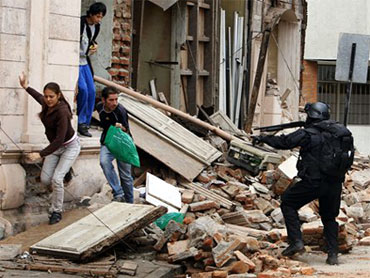 Aftershocks continue to rattle Chile, days after the devastating 8.8 earthquake.

In the first 72 hours after Saturday's quake, there were 131 aftershocks of magnitude 5 or greater.

And officials continue to count the dead. Chile's National Disaster Office says almost 800 are now known to have died.

One town is using a church as a morgue. In another, people are burying the dead quickly because the funeral home has no electricity.

Most of the deaths came in communities along Chile's south-central Pacific coast, near the quake's epicenter, where tsunami waves swept the shore.

Among the victims were 40 retirees enjoying summer vacation at a seaside campground. The tsunami hit them in three waves, surging 200 meters into the resort town of and dragging away the bus they'd piled into, hoping to get to high ground.

Aid is starting to arrive in Chile, including 25 satellite phones from the United States dropped off today by Secretary of State Hillary Rodham Clinton.

More coverage of the earthquake in Chile

Argentina has flown in a field hospital, while Brazil and Peru are sending cargo planes with supplies, hospitals and doctors.

Chilean troops have been dispatched to the earthquake zone to discourage looting, and officials have begun handing out food and water.

When supplies arrived in the central Chilean city of Constitucion, people didn't cheer. They jeered, furious with Chile's president that it took so long, reports CBS News Correspondent Mark Strassmann.

"She should come here," one man said, referring to Chile President Michelle Bachelet. "We need help. We don't have anything here."

Relief workers have their own frustration, Strassmann reports. With so many collapsed and closed roads and bridges, many areas desperate for help are cut off, and works have to hear yet again "You can't get there from here."

CONCEPCION - Looting has eased in Chile's second-largest city after 1,500 troops arrived to enforce a curfew.

Nearly every store in Concepcion has been looted following the weekend earthquake that left much of the city in ruins. Some stores were set on fire.

Chile's president, Michelle Bachelet, says 14,000 soldiers and marines have been deployed for security across the earthquake zone, and hundreds of tons of food, water and other basics are being flown in.

The magnitude 8.9 quake early Saturday has killed at least 723 people. Most of the deaths have been in communities along Chile's south-central Pacific coast, closest to the epicenter.

The quake set off a tsunami that sent waves 200 yards into one resort town, destroying about 300 homes and dragging away a bus carrying 40 vacationing retirees.

SANTIAGO - The secretary of state has delivered satellite phones - and Clinton is promising more aid to earthquake-ravaged Chile as it recovers from the deadly disaster.

At a news conference today with Chile's president in Santiago, Clinton said the U.S. would also send water purification systems and a mobile field hospital with surgical capability that is "ready to go."

Clinton said the U.S. is "ready to help in any way" that Chile requests.

CONCEPCION - The search for survivors has resumed at a toppled apartment building in the Chilean city of Concepcion.

Firefighters have already pulled 25 survivors and nine bodies from the structure, heavily damaged in Saturday's quake.

Security in the city is still a concern. A curfew that was in effect overnight has been extended until noon today, in an effort to crack down on looting.

Most markets in the city have been ransacked by looters, and by people desperate for food, water, toilet paper and other essentials. Troops were sent in, and dozens of arrests have been made.

All along the coast, in areas affected by the quake, food is scarce and destruction is widespread. In one community, the local church is serving as a morgue. In another, people quickly buried their dead because the funeral home has no electricity.

Chile's president says authorities are flying hundreds of tons of food, water and other basics into the region.